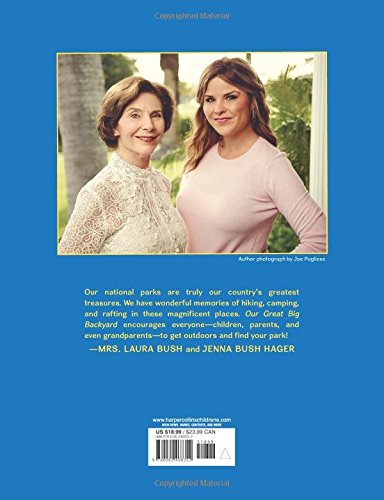 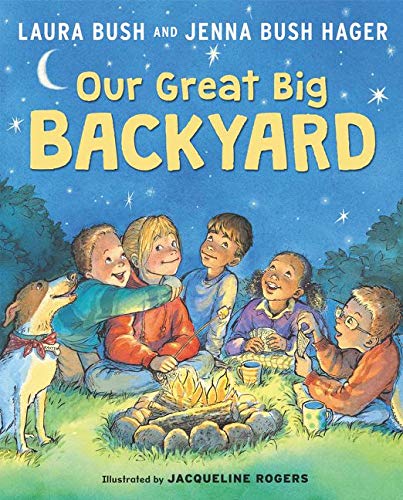 Product Description #1 New York Times bestselling authors former First Lady Laura Bush and her daughter Jenna Bush Hager have created an exuberant picture book tribute to our national parks and the importance and fun of connecting with nature. Our Great Big Backyard follows Jane, whose plans of spending the summer playing video games with her friends are dashed when her parents announce that her family is going on a road trip to national parks around the country. Yet somewhere between the Everglades and Big Bend National Park, things begin to change. Jane starts paying attention to the magnificent sights and spends less time looking at her screen. The stunning views open up her imagination as she and her brother see everything that nature has to offer. And the more Jane discovers, the more she realizes how much there is to love about the outdoors—whether she’s in a national park across the country or right in her own backyard. About the Author For decades, Laura Bush has championed key issues in the fields of education, health care, human rights, and the preservation of our nation’s heritage. A hiking and outdoors enthusiast, Mrs. Bush encourages Americans to spend time in and care for our national parks. The author of the bestselling memoir Spoken from the Heart, Mrs. Bush also founded both the Texas Book Festival and the National Book Festival in Washington, DC. Today, as the chair of the Women’s Initiative at the George W. Bush Institute, Mrs. Bush continues her work on global health-care innovations, empowering women in emerging democracies, education reform, and supporting the men and women who have served in America’s military.  Mrs. Bush holds a degree in education and a master’s degree in library science. She taught in public schools in Dallas, Houston, and Austin and worked as a public school librarian. Jenna Bush Hager is the cohost of the fourth hour of the Today show with Hoda Kotb and the founder of the Today book club, Read with Jenna. She is the author of the New York Times bestselling Everything Beautiful in Its Time and coauthor of the #1 New York Times bestselling Ana’s Story and two children’s books—Our Great Big Backyard and Read All About It—which she wrote with her mother, Laura, as well as the #1 New York Times bestsellers Sisters First, written with her sister, Barbara, in both adult and children’s editions. She lives with her husband and three children in New York City. Jaqueline Rogers has been a professional children's book illustrator for more than twenty years and has worked on nearly one hundred children's books.