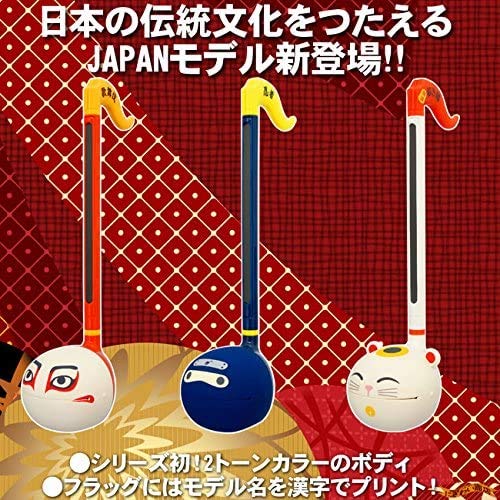 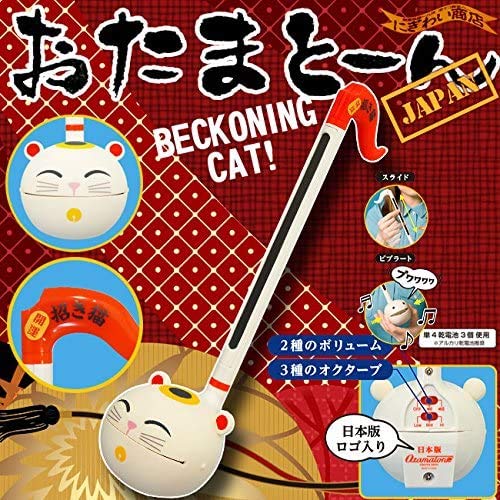 WHAT IS OTAMATONE? The Otamatone is a cute, quirky, and fun to play electronic musical toy characterized by its eighth note-shaped body, adorable moving mouth, and silly, buzzing, amusingly off-key "voice." Developed by design firm Maywa Denki, it was first released in Japan in 2009 and has been the country's best-selling musical toy ever since. Innovative, unique, and now a popular toy worldwide, the Otamatone has earned high praise from fans and the toy industry alike, including the Japan Toy Association's grand prize Japanese Toy Award in their 'High Target' toy division. HOW DOES IT WORK? You don't need to be a professional musician to have fun with the Otamatone - anyone can get the hang of it! Play any tune you like by sliding fingers up and down on the stem. Shake the Otamatone while playing for vibrato and create a "wah-wah" effect by squeezing the Otamatone's cheeks to make it's mouth open and close. Switches on the back of the head allow you to switch octaves, control the volume, and turn the Otamatone on and off to preserve battery life. ABOUT OTAMATONE JAPAN The Otamatone was born in Japan so why not dress it in Kabuki, Ninja or Lucky Cat clothes? The first Otamatone with a two-colored body has the model name imprinted on its flag in Japanese kanji characters. Mt. Fuji and traditional Japanese paper patterns inspired the package design. Functions and size are similar to the standard Otamatone. PERFECT GIFT FOR KIDS, TEENS, AND ADULTS! Great as a Christmas or birthday gift for any child, music lover, or anyone who wants to have fun making cute, silly songs on the world's weirdest musical instrument! Makes a hilarious joke or gag gift, and the smaller, keychain-sized Otamatone Melody designed for younger kids makes an adorable party favor too! Please Note: Due to monitor differences, actual colors may vary slightly from what appears online.

Current price$24.00
Since 37 days
Average price$34.54
Based on 3 years
Lowest price ever$18.00
2 years ago
Highest price ever$69.99
10 months ago
Amazing
Great
Average
High
This is absolutely the best time to buy. Don’t miss out, there's 95% probability of this price being higher soon. Buy now.
Buy on Amazon

Yes! But at Pricepulse we inform you when is the lowest price to buy the Otamatone Japanese Lucky Cat Maneki Neko Electroni

What is the current price of Otamatone Japanese Lucky Cat Maneki Neko Electroni?

What was the lowest price for the Otamatone Japanese Lucky Cat Maneki Neko Electroni?