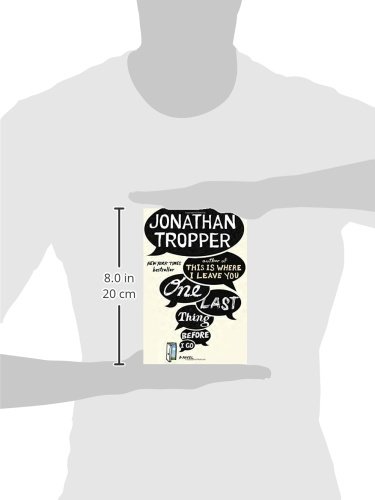 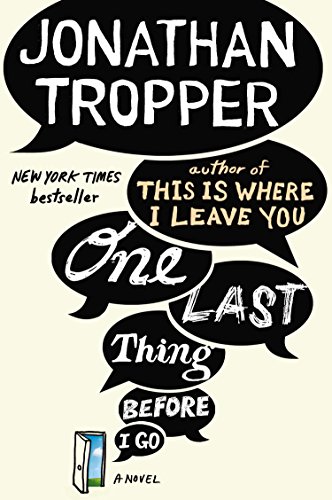 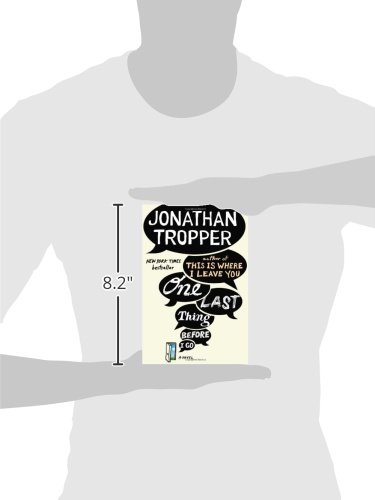 Product Description The bestselling author of This Is Where I Leave You returns with a hilarious and heart-rending tale about one familiy's struggle to reconnect. “Mistakes have been made.” Drew Silver has begun to accept that life isn’t going to turn out as he expected. His fleeting fame as the drummer for a one-hit wonder rock band is nearly a decade behind him. His ex-wife is about to marry a terrific guy. And his Princeton-bound teenage daughter Casey has just confided in him that she’s pregnant—because Silver is the one she cares least about letting down. So when Silver learns that he requires emergency life-saving heart surgery, he makes the radical decision to refuse the operation, choosing instead to spend what time he has left to repair his relationship with Casey, become a better man, and live in the moment—even if that moment isn’t going to last very long. As his exasperated family looks on, Silver grapples with the ultimate question of whether or not his own life is worth saving. Review "Tropper’s characters are likably zany and fallible, and perhaps more important, funny. One Last Thing Before I Go is a poignant story about facing death and celebrating life, even when things seem well beyond repair." --Newsweek/The Daily Beast on One Last Thing Before I Go "The richly talented Tropper ( This Is Where I Leave You) has created an acerbic, middle-aged lost soul who will ultimately illuminate the reasons we stick around on this lopsided planet despite significant temptation to let it go. Readers will love Silver and want to throttle him in equal measure. Eminently quotable, hilariously funny, and emotionally draining, this arresting tour de force will entertain well after the book is done."  - Library Journal (starred review) on One Last Thing Before I Go “…a bristling, witty tale of woe that'll make you appreciate whatever good things, no matter how few, have come your way.” – Entertainment Weekly on One Last Thing Before I Go About the Author Jonathan Tropper is the New York Times bestselling author of five previous novels; Plan B, The Book of Joe, Everything Changes, How To Talk to a Widower, and This Is Where I Leave You. His books have been translated into over twenty languages. He is also a screenwriter, and the co-creator and executive producer of the HBO/Cinemax television show Banshee (produced by Alan Ball), premiering in 2013. Excerpt. © Reprinted by permission. All rights reserved. Chapter 1 This is Tuesday, just under three weeks before his wife will be getting married, and a few days before Silver will tentatively decide that life isn’t necessarily worth living when you’ve been doing it as poorly as he has. It is seven years and four months or so since Denise divorced him for a host of valid reasons, and roughly eight years since his band, the Bent Daisies, released its only album and became rock stars overnight on the strength of their solitary hit, “Rest in Pieces.” For one blessed summer it seemed as if the entire world was singing that song. And then they weren’t, and then he couldn’t get arrested—although, actually, Silver did get arrested twice; one DUI and once for solicitation, and he would tell you about it if he could, but he was, at best, fuzzy about the details back then, and now it’s like an oral history long forgotten. Then, with a little back-channel manipulation from the record label, Pat McReedy, their lead singer, quit the band to launch his now epic solo career, dropping Danny (bass), Ray (lead guitar), and Silver (drums) back home in Elms-brook to stare down the barrel of the rest of their painfully unglamorous lives. With nowhere else to go, Silver went back home to discover that Denise had already changed the locks and retained counsel. But that was then, and this is Tuesday, eight years and countless mistakes later. Silver is forty-four years old, if you can believe it, out of shape, and depressed—although he doesn’t know if you call it depression when yo

One Last Thing Before I Go A Novel, is it available on Amazon?

Yes! But at Pricepulse we inform you when is the lowest price to buy the One Last Thing Before I Go A Novel

Should I buy the One Last Thing Before I Go A Novel now?

What is the current price of One Last Thing Before I Go A Novel?

What was the lowest price for the One Last Thing Before I Go A Novel?