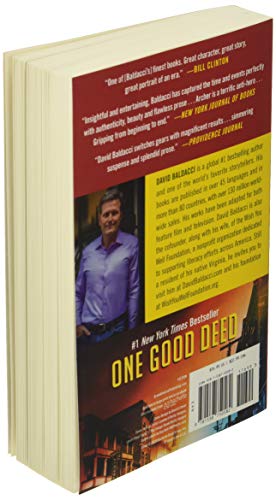 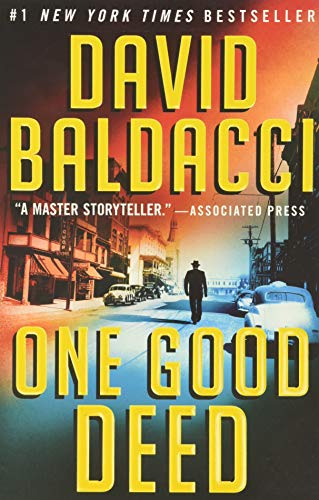 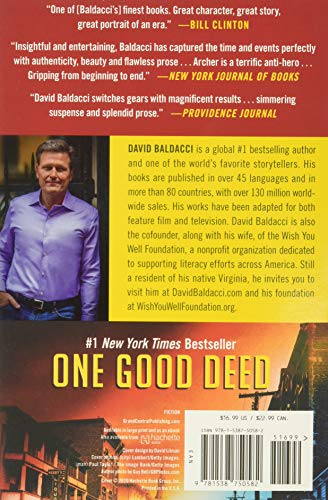 Product Description In this fast-paced historical thriller, the #1 New York Times bestselling author introduces Archer, a WWII veteran forced to investigate a small-town murder -- or risk returning to prison. It's 1949. When war veteran Aloysius Archer is released from Carderock Prison, he is sent to Poca City on parole with a short list of do's and a much longer list of don'ts: do report regularly to his parole officer, don't go to bars, certainly don't drink alcohol, do get a job -- and don't ever associate with loose women. The small town quickly proves more complicated and dangerous than Archer's years serving in the war or his time in jail. Within a single night, his search for gainful employment -- and a stiff drink -- leads him to a local bar, where he is hired for what seems like a simple job: to collect a debt owed to a powerful local businessman, Hank Pittleman. Soon Archer discovers that recovering the debt won't be so easy. The indebted man has a furious grudge against Hank and refuses to pay; Hank's clever mistress has her own designs on Archer; and both Hank and Archer's stern parole officer, Miss Crabtree, are keeping a sharp eye on him. When a murder takes place right under Archer's nose, police suspicions rise against the ex-convict, and Archer realizes that the crime could send him right back to prison . . . if he doesn't use every skill in his arsenal to track down the real killer. Review "One of [Baldacci's] finest books. Great character, great story, great portrait of an era."― Bill Clinton "David Baldacci is a master storyteller, and he invokes the classic feel of the post-war 1940s evident in the timeless literature and film of that time. A sympathetic hero and a cast of mysterious citizens in a small town summon familiar themes one expects in a Baldacci novel, and he once again doesn't disappoint."― Associated Press "Insightful and entertaining, Baldacci has captured the time and events perfectly with authenticity, beauty and flawless prose . . . Archer is a terrific anti-hero with plenty of longevity and originality [and] the supporting cast is just as memorable. Gripping from beginning to end."― New York Journal of Books "Baldacci has crafted an ingenious and addicting read in which each paragraph provides a new revelation. The time period and writing style immediately called to mind the works of the immortal James M. Cain . . . [a] terrific slice of crime noir."― Bookreporter.com "Mega-selling mystery writer David Baldacci's latest takes us back in time and introduces a new series protagonist that may become one of his most popular . . . a captivating page-turner."― The Florida Times-Union "David Baldacci switches gears with magnificent results . . . simmering suspense and splendid prose . . . Terrific-reading entertainment."― Providence Journal "Baldacci nails the setting -- capturing everything from the way things looked back in 1949 to how people spoke, adding realism and authenticity to the story. The characters are developed nicely, especially Archer, who flashes real star power throughout . . . Fast-paced and packed with plenty of suspense."― The Real Book Spy "One Good Deed is an uproarious, tangled-web tale . . . David Baldacci knows how to pleasurably wind us up."― The Washington Book Review "Baldacci is a master of pace and plotting, and One Good Deed doesn't let up on the throttle. A good ´40s noir."― Historical Novel Society "This is a world that twists with murder and vengeance . . . Will keep you engrossed until the last page."― She Reads About the Author David Baldacci is a global #1 bestselling author, and one of the world's favorite storytellers. His books are published in over forty-five languages and in more than eighty countries, with 150 million copies sold worldwide. His works have been adapted for both feature film and television. David Baldacci is also the cofounder, along with his wife, of the Wish You Well Foundation, a nonprofit organization dedicat

A Minute to Midnight (An Atlee Pine Thriller, 2)

A Minute to Midnight (An Atlee Pine Thriller, 2)

One Good Deed An Archer Novel, is it available on Amazon?

Yes! But at Pricepulse we inform you when is the lowest price to buy the One Good Deed An Archer Novel

Should I buy the One Good Deed An Archer Novel now?

What is the current price of One Good Deed An Archer Novel?

What was the lowest price for the One Good Deed An Archer Novel?