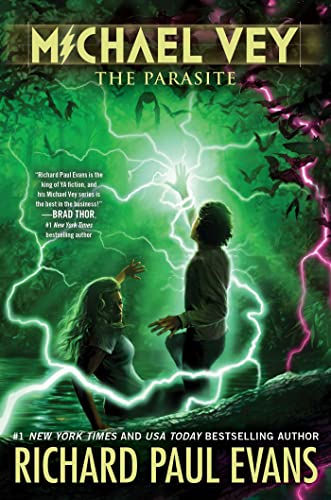 Product Description Michael Vey is back with an electrifying eighth installment of the award-winning, #1 New York Times bestselling series. Join Michael and the Electroclan as a new threat arises even more terrible and calculating than the Elgen. Michael and his friends learn that returning to a normal life is not only more difficult than they imagined, but that normal doesn’t last. Like the mythical Hydra, cutting off the head of the global Elgen only created more enemies. Michael Vey fans worldwide will celebrate the return of this exciting series with the world’s greatest team of electric superheroes. About the Author Richard Paul Evans is the #1 New York Times and USA TODAY bestselling author of more than forty novels. There are currently more than thirty-five million copies of his books in print worldwide, translated into more than twenty-four languages. Richard is the recipient of numerous awards, including two first place Storytelling World Awards, the Romantic Times Best Women’s Novel of the Year Award, and is a five-time recipient of the Religion Communicators Council’s Wilbur Awards. Seven of Richard’s books have been produced as television movies. His first feature film, The Noel Diary, starring Justin Hartley (This Is Us) and acclaimed film director, Charles Shyer (Private Benjamin, Father of the Bride), will debut in 2022. In 2011 Richard began writing Michael Vey, a #1 New York Times bestselling young adult series which has won more than a dozen awards. Richard is the founder of The Christmas Box International, an organization devoted to maintaining emergency children’s shelters and providing services and resources for abused, neglected, or homeless children and young adults. To date, more than 125,000 youths have been helped by the charity. For his humanitarian work, Richard has received the Washington Times Humanitarian of the Century Award and the Volunteers of America National Empathy Award. Richard lives in Salt Lake City, Utah, with his wife, Keri, and their five children and two grandchildren. You can learn more about Richard on his website RichardPaulEvans.com. Excerpt. © Reprinted by permission. All rights reserved. Chapter 1: The Second Act 1 The Second Act My life is snoring. Everything’s boring. Tuesday, April 16 (My Birthday) My name is Michael Vey. It’s been a few years since I’ve written anything about my life. Really, there hasn’t been a whole lot to write about. At least not anything you’d want to read. That’s because the last three years have been what most people consider normal—and by “normal,” I mean not being tied up and fed to rats or being hunted by a homicidal maniac who bought a cannibal fork so he could celebrate his victory over us by eating me. I’m in my second semester of my junior year of college, working toward a business management degree. Even that sounds boring. I scribbled that rhyme—technically a couplet—as I counted down the minutes until class was over. Other than our upcoming Electroclan reunion, there’s nothing in my life that vaguely excites me right now. The thing is, in a life like mine, normal doesn’t feel normal. I hear these college students around me talk about what they want to do with their lives. I’ve already faced death, brought down a dictator, captured billions of dollars, and saved the world from Elgen tyranny. What am I supposed to do for a second act? I mean, what other college student has the Tuvaluan medal of honor and is also on the Peruvian government’s Most-Wanted Terrorists list? (I’m still on it. You can see it online.) The thing is, easy living makes for boring reading. Who wants to read about someone’s normal day? Since I last wrote, I graduated from high school, started college at Boise State, and went fishing with my dad in Alaska. Actually, the fishing thing had its moment. My dad and I were fishing for salmon at Mendenhall Lake in Juneau. After an hour we still hadn’t caught anything when I had an idea. I put my hand into the wate

Heart of the Raven Prince: A Cinderella Retelling (Entangled with Fae)

The Protector's Vengeance (The Tales of Caledonia Book 3)

With Dagger and Song (Curse of the Cyren Queen Book 2)

Michael Vey 8 The Parasite 8, is it available on Amazon?

Yes! But at Pricepulse we inform you when is the lowest price to buy the Michael Vey 8 The Parasite 8

Should I buy the Michael Vey 8 The Parasite 8 now?

What is the current price of Michael Vey 8 The Parasite 8?

What was the lowest price for the Michael Vey 8 The Parasite 8?