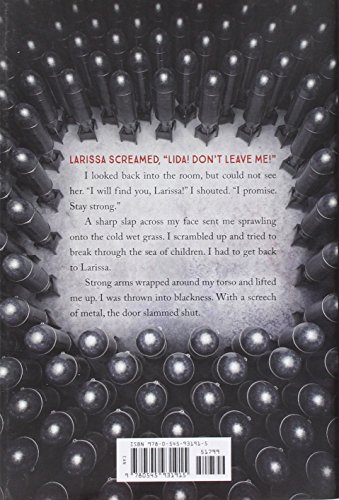 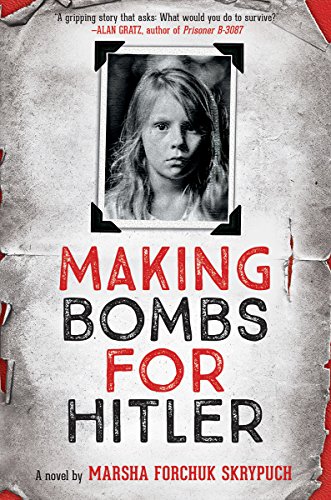 Product Description For readers who were enthralled by Alan Gratz's PRISONER B-3087 comes a gripping novel about a lesser-known part of WWII. Lida thought she was safe. Her neighbors wearing the yellow star were all taken away, but Lida is not Jewish. She will be fine, won't she? But she cannot escape the horrors of World War II. Lida's parents are ripped away from her and she is separated from her beloved sister, Larissa. The Nazis take Lida to a brutal work camp, where she and other Ukrainian children are forced into backbreaking labor. Starving and terrified, Lida bonds with her fellow prisoners, but none of them know if they'll live to see tomorrow. When Lida and her friends are assigned to make bombs for the German army, Lida cannot stand the thought of helping the enemy. Then she has an idea. What if she sabotaged the bombs... and the Nazis? Can she do so without getting caught? And if she's freed, will she ever find her sister again? This pulse-pounding novel of survival, courage, and hope shows us a lesser-known piece of history -- and is sure to keep readers captivated until the last page. From School Library Journal Gr 6–8—This stark novel follows Stolen Child with another story depicting the horrors faced by children in Nazi work camps. Lida is determined to watch out for her little sister, Larissa, but she's rendered unconscious soon after being captured by Nazi soldiers. She awakens to find herself in a dark, filthy railroad car jammed with other Ukrainian children. Lida is one of the "lucky ones" because soldiers have decided she can be of value to them. She is devastated that she has been separated from her younger sister and can only fear the worst. Even though the other children in the railroad car are strangers to one another, they all quickly bond. Once they reach the end of their journey, Lida and her new friends are herded into a labor camp, divided up, and given various tasks. The children come to realize they will be worked until they are too weak to function, then killed. Lida works in a factory making bombs that will be used to kill soldiers who are fighting to end the Nazi reign. With tremendous courage, Lida and her friends begin a sabotage plan, despite the threat of death if they are discovered. Students will admire Lida's pluck amid such heinous conditions. Scenes of the labor camp convey the horrors without graphic description. VERDICT An absorbing read about the lesser-known Ukrainian experience during World War II, this is a solid choice for curricular ties and for middle school historical fiction collections.—Julie Shatterly, W. A. Bess Elementary School, Gastonia, NC Review Praise for Making Bombs for Hitler: "A gripping story that asks: What would you do to survive?" -- Alan Gratz, author of Prisoner B-3087 "Inspired by real, historical accounts, this is a powerful, harrowing story of transformation." -- Booklist "Skrypuch draws on real-life stories of survivors in telling Lida's poignant tale, and she creates a cast of young people who are devoted to one another in both thought and deed.... A well-told story of persistence, lost innocence, survival, and hope." -- Kirkus Reviews "The story [has a] strong undercurrent of friendship and loyalty; an author's note gives further background on this important piece of history." -- Publishers Weekly "Students will admire Lida's pluck amid such heinous conditions.... An absorbing read about the lesser-known Ukrainian experience during World War II, this is a solid choice for curricular ties and for middle school historical fiction collections." -- School Library Journal "Skrypuch has written a gripping, emotional novel of one Ukrainian girl's perseverance during the horrors of war.... This is a vivid picture of what youth experienced during World War II and the hopelessness of displaced populations of all backgrounds and religions." -- VOYA About the Author MARSHA FORCHUK SKRYPUCH is the author of more than a dozen books, i