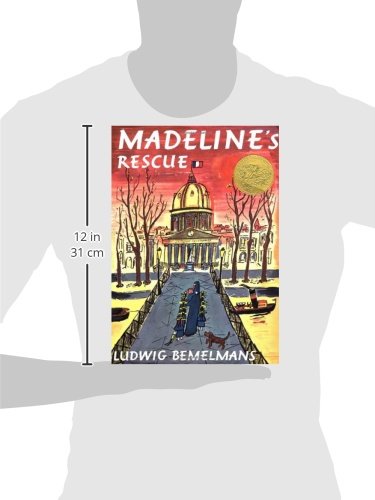 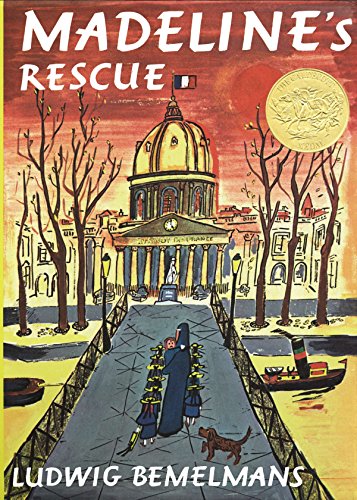 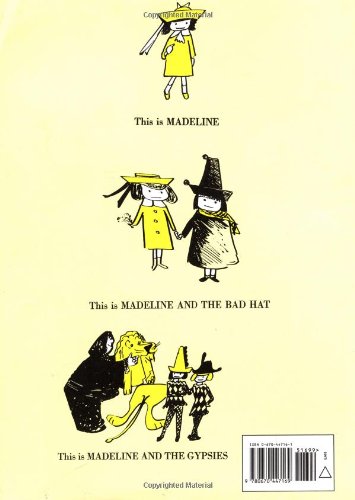 Product Description Winner of the Caldecott Medal“ In an old house in Paris that was covered with vines lived twelve little girls in two straight lines the smallest one was Madeline. ”   Nothing frightens Madeline—not tigers, not even mice. With its endearing, courageous heroine, cheerful humor, and wonderful, whimsical drawings of Paris, the Madeline stories are true classics that continue to charm readers even after 75 years! When Madeline falls into the river Seine and nearly drowns, a courageous canine comes to her rescue. Now Genevieve the dog is Madeline's cherished pet, and the envy of all the other girls. What can be done when there's just not enough hound to go around? Ludwig Bemelmans (1898-1962) was the author of the beloved Madeline books, including  Madeline, a Caldecott Honor Book, and  Madeline's Rescue, winner of the Caldecott Medal. Amazon.com Review It took Ludwig Bemelmans years to think of Madeline's next adventure after the 1939 original , but he did it, and the result was Madeline's Rescue, winner of the 1954 Caldecott Medal. One day on a walk through Paris (a "twelve little girls in two straight lines" kind of walk), Madeline slips and falls off a bridge right into the Seine. Everyone feared she would be dead, "But for a dog / That kept its head," saving her from a "watery grave." What choice do Madeline and the girls have but to take the heroic pooch home, feed her biscuits, milk, and beef, and name her Genevieve? Sadly, when Lord Cucuface gets wind of the new dog, he decrees that no dogs will be allowed in the "old house in Paris that was covered with vines," and kicks Genevieve out on the street. Madeline vows vengeance, and the girls scour Paris looking for the pup: "They went looking high / and low / And every place a dog might go. / In every place they called her name / But no one answered to the same." As we've come to expect from Bemelmans, all's well that ends well chez Clavel, and young readers will be tickled by this heartwarming, quirky dog story with a surprise finale. (Ages 4 to 8) --Karin Snelson About the Author Ludwig Bemelmans was a painter, illustrator, and writer for both children and adults. His Madeline book rank among the most honored children’s book series. Madeline was named a Caldecott Honor Book, and the first of its five sequels, Madeline’s Rescue, won the Caldecott Medal and was a New York Times Outstanding Book of the Year. Mr. Bemelmans died in 1962, after completing Madeline’s Christmas. Visit penguin.com/madeline.

Current price$14.99
Since 25 days
Average price$13.24
Based on 9 years
Lowest price ever$7.32
13 months ago
Highest price ever$17.97
15 months ago
Amazing
Great
Average
High
It's not a good time to buy now, there's a 78% probability this price will decrease. Our advise is to Watch it.
Buy on Amazon

Madelines Rescue, is it available on Amazon?

Yes! But at Pricepulse we inform you when is the lowest price to buy the Madelines Rescue

Should I buy the Madelines Rescue now?

It's not a good time to buy now, there's a 78% probability this price will decrease. Our advise is to Watch it.

What is the current price of Madelines Rescue?

What was the lowest price for the Madelines Rescue?

The lowest historical price was $7.32