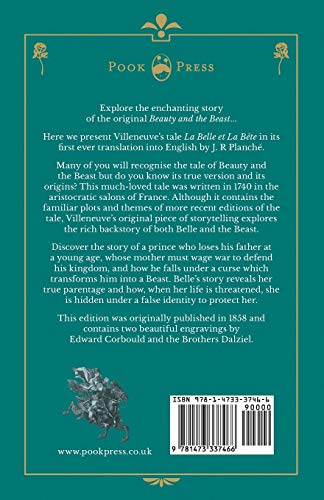 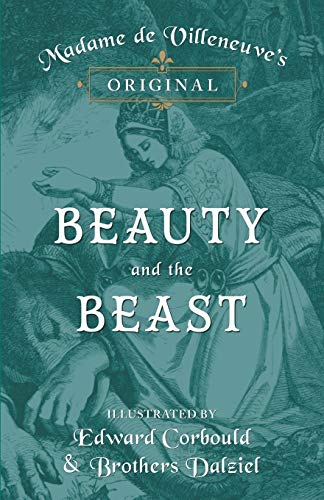 This book is 'Villeneuve's Original Beauty and the Beast' story, first translated into English by J. R Planché. Although it contains the familiar plots and themes of more recent shortened versions of the tale, Villleneuve's original piece of story telling explores the back story of both Belle and the Beast. The Beast was a prince who lost his father at a young age, and whose mother had to wage war to defend his kingdom. Belle’s story reveals her true parentage and her life is threatened. This edition was originally published in 1858 and contains two beautiful engravings by Edward Corbould and the Brothers Dalziel. Villeneuve was a French author influenced by Madame d’Aulnoy, Charles Perrault and various female intellectuals. La Belle et La Bête was first published in 1740 published in La Jeune Américaine, et Les Contes Marins. Planché himself was a British dramatist and antiquary, chiefly responsible for introducing historically accurate costume into nineteenth century British theatre. His interest in folklore stemmed from such endeavours – and his passion for the tales as well as mastery of the French language is apparent in this text. Pook Press celebrates the great 'Golden Age of Illustration' in children's classics and fairy tales - a period of unparalleled excellence in book illustration. We publish rare and vintage Golden Age illustrated books, in high-quality colour editions, so that the masterful artwork and story-telling can continue to delight both young and old.

Madame De Villeneuves Original Beauty And The Beas, is it available on Amazon?

Yes! But at Pricepulse we inform you when is the lowest price to buy the Madame De Villeneuves Original Beauty And The Beas

Should I buy the Madame De Villeneuves Original Beauty And The Beas now?

What is the current price of Madame De Villeneuves Original Beauty And The Beas?

What was the lowest price for the Madame De Villeneuves Original Beauty And The Beas?