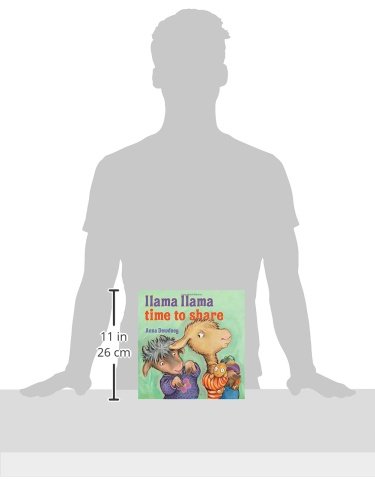 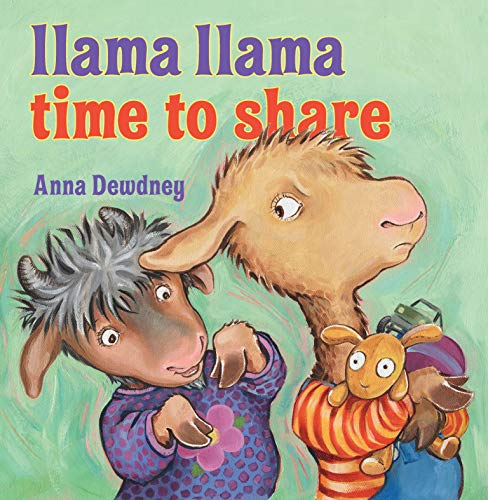 Product Description Llama has a sharing drama! Build a tower. Make a moat. Nelly's dolly sails a boat. What can Llama Llama add? Maybe sharing's not so bad. Llama Llama has new neighbors! Nelly Gnu and her mama stop by for a play date, but Llama's not so sure it's time to share all his toys. Maybe just his blocks? It could be fun to make a castle with Nelly . . . But wait--Nelly has Llama's little Fuzzy Llama! The fun turns to tears when Fuzzy Llama is ripped in two, "all because of Nelly Gnu!" Mama comes to the rescue and fixes Fuzzy, but she makes it clear: "I'll put Fuzzy on the stairs, until you're sure that you can share." Fun to read aloud and helpful to children and parents alike, Llama Llama Time to Share is for any child who needs a little encouragement in sharing. From School Library Journal PreS-K-When the new neighbors stop by for a visit, Mama reminds Llama Llama and Nelly Gnu to share. The two youngsters get along well until Nelly plays with Llama Llama's most cherished toy, and a brief scuffle results in Fuzzy Llama's arm being torn off. Not to worry, the toy and friendship are soon mended, leaving everyone anticipating the next playdate. Dewdney's large paintings are bright, bold, and expressive. This picture book will be a pleasure to share with friends, old and gnu.-Laura Butler, Mount Laurel Library, NJα(c) Copyright 2011. Library Journals LLC, a wholly owned subsidiary of Media Source, Inc. No redistribution permitted. From Booklist In this brightly illustrated book from the Llama Llama series, new neighbors come to visit. Llama manages to share his blocks and play nicely with little Nelly Gnu, sometimes referred to as “the Gnu girl.” But when he sees her playing with his dolly Fuzzy, Llama grabs, Nelly tugs, and Fuzzy’s arm rips off. After apologies and a bit of mending, Llama and Nelly enjoy playing together again. Clearly depicting the characters’ emotions, Dewdney’s paintings bring the rhyming text to life on the page. The simplicity of the story and its timeless topic will make this a popular choice for reading aloud. Preschool-Kindergarten. --Carolyn Phelan Review Praise for Llama Llama Time to Share by Anna Dewdney: "Once again, Dewdney conveys a highly relatable source of llama drama with warmth and authentically childlike characters." — Publishers Weekly, starred review "A solid addition to the popular series for toddlers and preschoolers." — Kirkus  "This picture book will be a pleasure to share with friends, old and gnu." — School Library Journal About the Author Anna Dewdney was a teacher, mother, and enthusiastic proponent of reading aloud to children. She continually honed her skills as an artist and writer and published her first Llama Llama book in 2005. Her passion for creating extended to home and garden and she lovingly restored an 18th century farmhouse in southern Vermont. She wrote, painted, gardened, and lived there with her partner, Reed, her two daughters, two wirehaired pointing griffons, and one bulldog. Anna passed away in 2016, but her spirit will live on in her books.

Current price$9.95
Since 52 days
Average price$12.07
Based on 8 years
Lowest price ever$5.80
3 years ago
Highest price ever$16.99
2 months ago
Amazing
Great
Average
High
This is a great price to buy! There's a 82% probability this price will be higher. Our advise is Buy it now.
Buy on Amazon

Llama Llama and the Bully Goat

Llama Llama and the Bully Goat

The Last Kids on Earth: Next Level Monster Box (books 4-6)

How to Catch a Snowman

Star Wars The High Republic: A Test of Courage

Llama Llama Time To Share, is it available on Amazon?

Yes! But at Pricepulse we inform you when is the lowest price to buy the Llama Llama Time To Share

Should I buy the Llama Llama Time To Share now?

This is a great price to buy! There's a 82% probability this price will be higher. Our advise is Buy it now.

What is the current price of Llama Llama Time To Share?

What was the lowest price for the Llama Llama Time To Share?