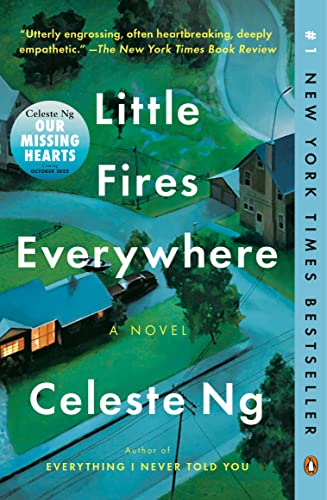 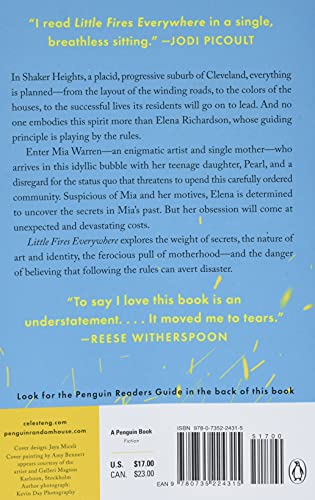 Product Description The #1 New York Times bestseller!“Witty, wise, and tender. It's a marvel.” —Paula Hawkins, author of The Girl on the Train and A Slow Fire Burning“To say I love this book is an understatement. It’s a deep psychological mystery about the power of motherhood, the intensity of teenage love, and the danger of perfection. It moved me to tears.” —Reese WitherspoonFrom the bestselling author of Everything I Never Told You and Our Missing Hearts comes a riveting novel that traces the intertwined fates of the picture-perfect Richardson family and the enigmatic mother and daughter who upend their lives. In Shaker Heights, a placid, progressive suburb of Cleveland, everything is planned—from the layout of the winding roads, to the colors of the houses, to the successful lives its residents will go on to lead. And no one embodies this spirit more than Elena Richardson, whose guiding principle is playing by the rules. Enter Mia Warren—an enigmatic artist and single mother—who arrives in this idyllic bubble with her teenaged daughter Pearl, and rents a house from the Richardsons. Soon Mia and Pearl become more than tenants: all four Richardson children are drawn to the mother-daughter pair. But Mia carries with her a mysterious past and a disregard for the status quo that threatens to upend this carefully ordered community.When old family friends of the Richardsons attempt to adopt a Chinese-American baby, a custody battle erupts that dramatically divides the town—and puts Mia and Elena on opposing sides.  Suspicious of Mia and her motives, Elena is determined to uncover the secrets in Mia’s past. But her obsession will come at unexpected and devastating costs. Little Fires Everywhere explores the weight of secrets, the nature of art and identity, and the ferocious pull of motherhood—and the danger of believing that following the rules can avert disaster.Named a Best Book of the Year by: People, The Washington Post, Bustle, Esquire, Southern Living, The Daily Beast, GQ, Entertainment Weekly, NPR, Amazon, Barnes & Noble, iBooks, Audible, Goodreads, Library Reads, Book of the Month, Paste, Kirkus Reviews, St. Louis Post-Dispatch, and many more...Perfect for book clubs! Visit celesteng.com for discussion guides and more. Review “I read Little Fires Everywhere in a single, breathless sitting. With brilliance and beauty, Celeste Ng dissects a microcosm of American society just when we need to see it beneath the microscope: how do questions of race stack up against the comfort of privilege, and what role does that play in parenting? Is motherhood a bond forged by blood, or by love? And perhaps most importantly: do the faults of our past determine what we deserve in the future? Be ready to be wowed by Ng's writing—and unsettled by the mirror held up to one's own beliefs.” —Jodi Picoult, New York Times bestselling author of My Sister's Keeper and Wish You Were Here“Witty, wise, and tender. It's a marvel.” —Paula Hawkins, author of The Girl on the Train and A Slow Fire Burning“Witnessing these two families as they commingle and clash is an utterly engrossing, often heartbreaking, deeply empathetic experience . . . It’s this vast and complex network of moral affiliations—and the nuanced omniscient voice that Ng employs to navigate it—that make this novel even more ambitious and accomplished than her debut . . . Our trusty narrator is as powerful and persuasive and delightfully clever as the narrator in a Victorian novel . . . It is a thrillingly democratic use of omniscience, and, for a novel about class, race, family and the dangers of the status quo, brilliantly apt . . . The magic of this novel lies in its power to implicate all of its characters—and likely many of its readers—in that innocent delusion [of a post-racial America]. Who set the littles fires everywhere? We keep reading to find out, even as we suspect that it could be us with ash on our hands.” —Eleanor Henderson, The New York Times Book Review“[Ng]

Everything I Never Told You

Everything I Never Told You