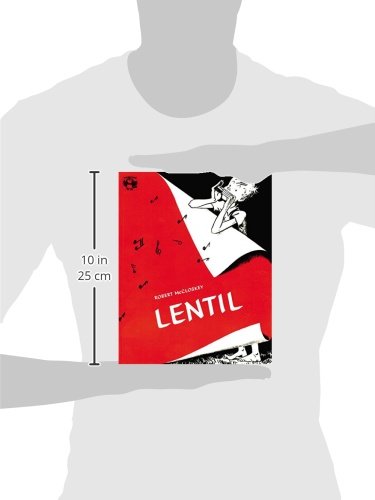 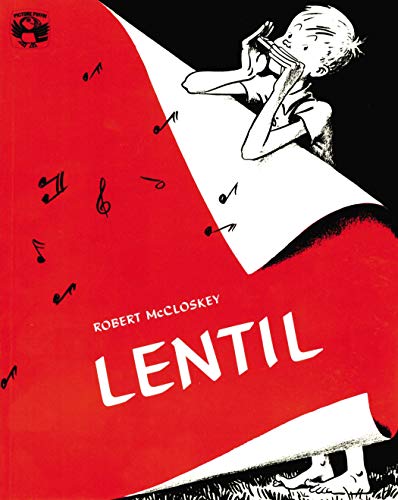 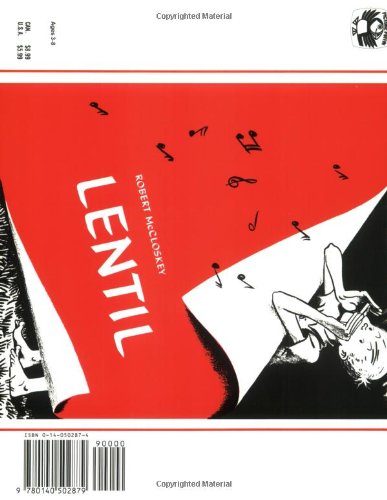 Product Description Young Lentil wants to learn to sing, but no matter how hard he tries he can’t sing on key.  He can’t even pucker his lips to whistle!  So Lentil learns to play the harmonica instead and beautifully carries his tune through the winding streets of Alto, Ohio.  Lentil masters his craft just as the beloved Colonel Carter returns to town and the Alto residents decide to plan a special celebration.  But Old Sneep, the grouchiest man in town, doesn’t want anyone celebrating Colonel Carter’s homecoming.  When Old Sneep stops the welcoming parade in its tracks, Lentil’s music turns out to be just what Alto needs. Robert McCloskey, the Caldecott-winning author and illustrator of Make Way for Ducklings, brings readers this delightful two color picture book. From the Back Cover Lentil cannot sing or even whistle; longing to make music in some fashion, he provides himself with a harmonica and practices constantly wherever he is, especially in the bathtub, because there his tone is improved 100 percent. A book that, along with its fun, truly illustrates the American scene. About the Author Robert McCloskey (1914-2003) wrote and illustrated some of the most honored and enduring children's books ever published. He grew up in Hamilton, Ohio, and spent time in Boston, New York, and ultimately Maine, where he and his wife raised their two daughters. The first ever two-time Caldecott Medal winner, for Make Way for Ducklings and Time of Wonder, McCloskey was also awarded Caldecott Honors for Blueberries for Sal, One Morning in Maine, and Journey Cake, Ho! by Ruth Sawyer.  He was declared a Living Legend by the Library of Congress in 2000.  You can see some of his best-loved characters immortalized as statues in Boston's Public Garden and Lentil Park in Hamilton, Ohio.

Current price$7.99
Since 29 days
Average price$6.74
Based on 9 years
Lowest price ever$4.33
5 years ago
Highest price ever$7.99
29 days ago
Amazing
Great
Average
High
It's not a good time to buy now, there's a 98% probability this price will decrease. Our advise is to Watch it.
Buy on Amazon

My New Friend Is So Fun! (An Elephant and Piggie Book)

Biscuit Goes to School (My First I Can Read)

Lentil Picture Puffin Books, is it available on Amazon?

Yes! But at Pricepulse we inform you when is the lowest price to buy the Lentil Picture Puffin Books

Should I buy the Lentil Picture Puffin Books now?

It's not a good time to buy now, there's a 98% probability this price will decrease. Our advise is to Watch it.

What is the current price of Lentil Picture Puffin Books?

What was the lowest price for the Lentil Picture Puffin Books?

The lowest historical price was $4.33