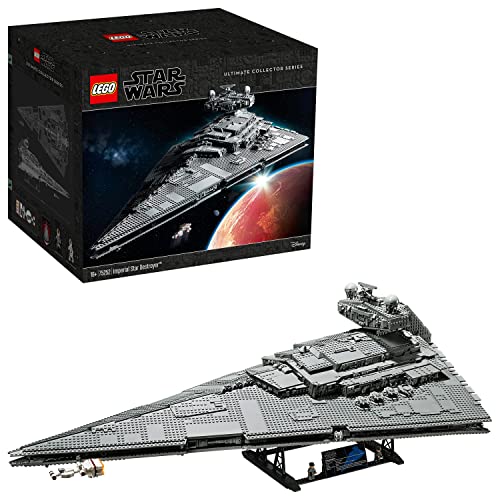 Build and display an icon of the Star Wars galactic civil war – the Devastator. With over 4,700 LEGO elements, this LEGO Star Wars collectors series Imperial Star Destroyer (75252), a truly massive to scale Star Wars buildable model captures all the authentic details of the starship as it appeared in the opening scene of Star Wars: A New Hope. This eye-catching giant Star Wars model for teens 16+ and adults certainly reproduces the overwhelming scale and epic proportions of its spectacular original. Measuring over 3' / 110cm in length and 2' / 61cm wide, this Star Wars toy is one of the largest LEGO sets ever, most certainly the longest one!* This Star Wars collectable vessel looks extremely impressive on display and includes superb features corresponding exactly with the movies. Amazingly detailed, the mechanical elements are appropriate and beautifully scaled, including iconic bridge tower - authentically designed with twin deflector shields and a tilting tractor beam antenna; huge engine exhausts - the auxiliary thrust nozzles appear equally authentic, featuring light blue grey barrels inside; and of course a buildable scale version of the Rebels’ Tantive IV starship, a scale model of the rebel starship that attaches to the front for display. The diminutive rendition of the Rebel Blockade Runner - Corellian Corvette includes brilliant specifics, combining white and dark red elements to outstanding effect. Other characteristics include swivelling guns and a tilting radar dish - quad laser batteries are situated towards the stern, the turrets are mounted on ball joints that provide extensive motion and you can move the cannons individually and rotate the turrets for the dynamic display. Then comes intricate surface detailing. The dominant light blue-grey colour scheme avoids monotony, as the combination of spotted and even surfaces are effective in creating beautiful textured detail and arisen shadows that are helpful in breaking up the monochromatic silhouette. Such uniform design compares favourably with the original protoplast and creates a suitable classic aesthetic. And this menacing formation stands out as exceptionally attractive due to its enormous scale! This galactic civil war UCS starship also includes a display stand with informational fact plaque, the blue Star Destroyer design on it looks gorgeous, and there is abundant space for minifigures to stand next to the plaque. *as per November 2019. UCS model on display stand measures over 17” (44cm) high, 43” (109cm) long and 26” (66cm) wide, and over 14” (37cm) high without stand. Contains 4,784 Pieces.

Yes! But at Pricepulse we inform you when is the lowest price to buy the Lego 75252 Star Wars Imperial Star Destroyer Colle

What is the current price of Lego 75252 Star Wars Imperial Star Destroyer Colle?

What was the lowest price for the Lego 75252 Star Wars Imperial Star Destroyer Colle?