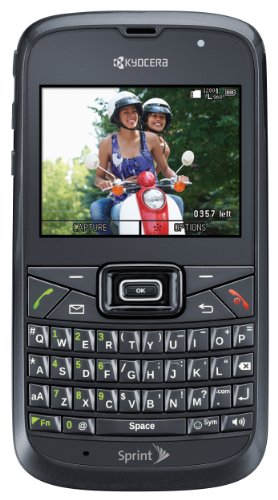 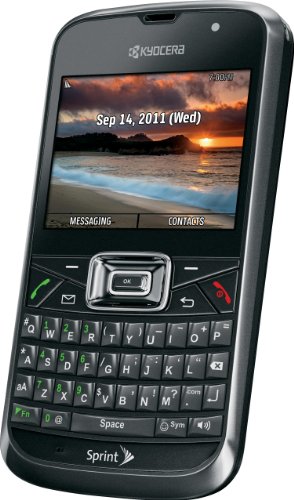 Amazon.com The Kyocera Brio for Sprint lets you stay connected simply. Update your favorite sites like Facebook or Twitter using the full QWERTY keyboard. Share pictures with your friends and family using the 1.3-megapixel camera. You'll be able to access your personal e-mail from well-known providers like AOL, Windows Live including MSN and Hotmail, Gmail, Yahoo! and more, as well as connect to Outlook e-mail with Microsoft Direct Push Technology. Other features include Bluetooth for hands-free devices and stereo music streaming, memory expansion via optional microSD cards up to 32 GB in size, and up to 4.7 hours of talk time. Key Features Vital Statistics The Kyocera Brio weighs 3.7 ounces and measures 4.5 x 2.4 x 0.6 inches. Its 870 mAh lithium-ion battery is rated at up to 4.7 hours of talk time. It runs on the 800/1900 CDMA frequencies; 1xRTT Voice & Data Capable. What's in the Box Kyocera Brio handset, rechargeable battery, charger, quick start guide Wireless Emergency Alerts (WEA), also known as CMAS, is a part of a national alerting system called IPAWS (Integrated Public Alert and Warning System) that enables emergency management officials to rapidly disseminate the warnings and safety information via text alerts to wireless phones based on the phones’ geographic location. The Federal Emergency Management Agency or FEMA is responsible for receiving the alerting information and forwarding the alerts to participating wireless carriers such as Sprint. Such alerts may come from the President of the United States; the National Weather Service, state or county public safety officials. This system is integrated into the same national alerting services that serve television and radio today.

Amazing
Great
Average
High
This is a great price to buy! There's a 92% probability this price will be higher. Our advise is Buy it now.
Buy on Amazon

Kyocera Brio Phone Grey Sprint, is it available on Amazon?

Yes! But at Pricepulse we inform you when is the lowest price to buy the Kyocera Brio Phone Grey Sprint

Should I buy the Kyocera Brio Phone Grey Sprint now?

This is a great price to buy! There's a 92% probability this price will be higher. Our advise is Buy it now.

What is the current price of Kyocera Brio Phone Grey Sprint?

What was the lowest price for the Kyocera Brio Phone Grey Sprint?