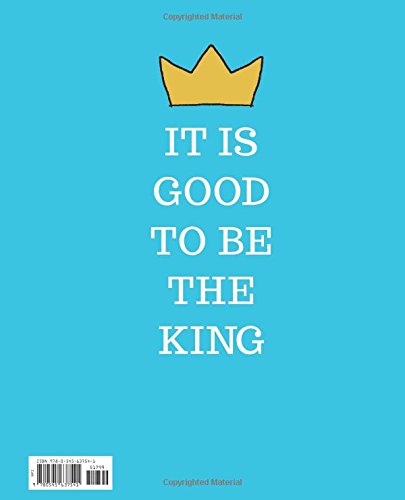 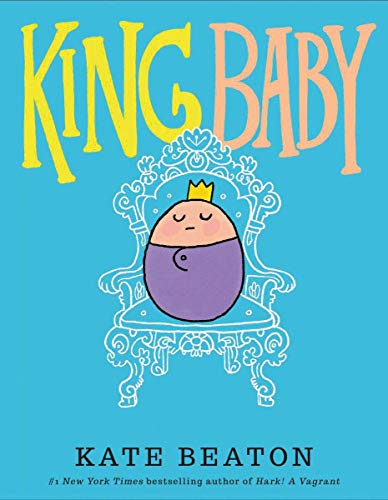 Product Description All hail King Baby! He greets his adoring public with giggles and wiggles and coos, posing for photos and allowing hugs and kisses. But this royal ruler also has many demands, and when his subjects can't quite keep up, King Baby takes matters into his own tiny hands. Created by Kate Beaton, author of The Princess and the Pony and #1 New York Times bestsellers Hark! A Vagrant and Step Aside, Pops!, this modern, funny, and (let's be honest) realistic take on life with a new baby is the perfect gift for anyone with an adorable little monarch in their world. From School Library Journal PreS-Gr 1—Beaton brings her well-honed snarky humor to the arena of new baby books. From the first page, the smug, egg-shaped, crown-wearing infant proclaims, "I am King Baby!" The tiny tyrant's reign of terror follows, as crowds of adoring visitors lavish him with attention and affection while he runs his parents ragged with demands for feeding, burping, changing, and bouncing. As the story progresses, King Baby undergoes important milestones, gradually transitioning from a baby to a walking, trike-riding "big boy." Just when it looks like King Baby is ready to surrender his royal crown, his replacement arrives—a little sister, Queen Baby. Beaton's hyperexpressive cartoon illustrations create a hilarious visual counterpoint to the baby's authoritarian first-person narration; on one spread, exhausted parents slump on the couch as the infant gazes victoriously over the floor strewn thick with baby paraphernalia and says, "It is good to be the king." VERDICT Similar in spirit to Marla Frazee's The Boss Baby, this is a delightful and silly tale for soon-to-be-older siblings and their weary parents.—Yelena Alekseyeva-Popova, formerly at Chappaqua Library, NY Review Praise for King Baby: "Beaton brings a fresh, modern energy and spot-on pacing to the regal-baby theme, showing why comics artists like her have been redefining what picture books can do." -- New York Times Book Review * "King Baby rules... Beaton keeps her book feeling fresh through humorous illustrations that expand on the wry text and never shy away from exposing the extent of King Baby's tyranny." -- Kirkus Reviews, starred review * "Beaton offers a sly, hilarious dig at the way young parents bow to their child's every desire." -- Publishers Weekly, starred review "Utterly charming and delightful, this book will merit countless readings." -- Bookish Praise for The Princess and the Pony: An ALA Notable Children's Book CBC Children's Choice Book Award Winner (Illustrator of the Year) Indies Choice and E.B. White Read-Aloud Book Award Finalist "I don't know how you make such a pretty book that has heart and wisdom and also a farting pony, but Kate Beaton does, and we are lucky that she does." -- Jon Klassen, Caldecott-winning creator of This Is Not My Hat and I Want My Hat Back "It is the perfect, perfect book about girls, gender roles, and adorable ponies." -- Cory Doctorow, boingboing.net * "[H]ip, modern, and absolutely refreshing... [T]his warrior princess breaks the mold -- and Beaton is in a class of her own." -- Kirkus Reviews, starred review * "It's a smart, brisk story that tosses aside conventional ideas of what princesses (and ponies) are 'supposed' to be." -- Publishers Weekly, starred review * "A highly recommended, charmingly illustrated tale of teamwork and tenderness." -- School Library Journal, starred review * "The perfect combination of heartwarming and hilarious." -- Booklist, starred review From the Inside Flap All hail King Baby! King Baby is gracious -- bestowing splendid smiles on his public, allowing tickles and hugs, and posing for photo after adorable photo. But he also has many demands, and when his faithful subjects let him down, King Baby himself must take royal action. From the creator of The Princess and the Pony and the hit webcomic Hark! A Vagrant, King Baby is the perfect gift for anyon

Current price$17.99
Since 42 hours
Average price$13.17
Based on 4 years
Lowest price ever$7.49
2 years ago
Highest price ever$17.99
42 hours ago
Amazing
Great
Average
High
It's not a good time to buy now, there's a 81% probability this price will decrease. Our advise is to Watch it.
Buy on Amazon

The Princess in Black and the Mysterious Playdate

The Dangerous Book for Boys

Bear Says Thanks (The Bear Books)

If I Ran the Horse Show: All About Horses (Cat in the Hat's Learning Library)

Legend of the Star Runner: A Timmi Tobbson Adventure Book for Boys and Girls (Solve-Them-Yourself Mysteries for Kids 8-12)

The Legend of Rock Paper Scissors

King Baby, is it available on Amazon?

Yes! But at Pricepulse we inform you when is the lowest price to buy the King Baby

Should I buy the King Baby now?

What is the current price of King Baby?

What was the lowest price for the King Baby?