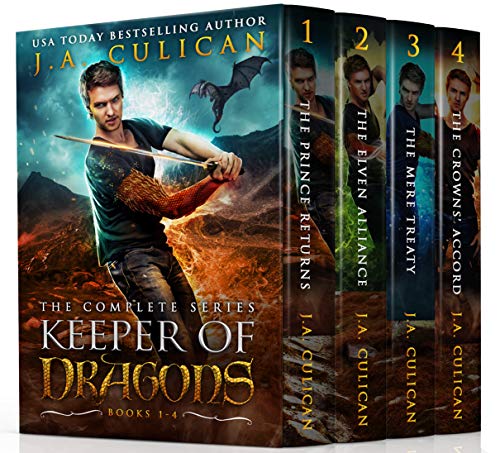 Moody Dragons. Snarky Elves. Fierce Mermaids. And two unlikely heroes who are fated to save them all.

This complete boxset includes the following full-length novels:
Book 1: The Prince Returns
Book 2: The Elven Alliance
Book 3: The Mere Treaty
Book 4: The Crowns' Accord
Genre: YA/ Teen Dragon Shifter Fantasy
The Prince Returns:
Cole's life spirals into an uncontrollable battle of life and death on his 18th birthday when he discovers his dragon heritage and the prophecy that awaits.

As if being a normal teenager isn't hard enough, Cole learns that he's also royalty. His birth parents are the king and queen of dragons. That makes Cole the Prince of Ochana--and their future king.

With that legacy comes a special mystical calling--devoting an eternity to protecting all beings from creatures bent on bringing an end to all that is good. This makes Cole the newly-minted Keeper of Dragons. With no formal training or control of his mahier dragon-magic, his first task is to keep the nefarious farro-fallen fairies at bay.

The foreseen prophecy set his fate in stone. If Cole can't embrace his destiny, then all beings will die--including his new dragon family.

Through the Ashes : The Complete Series

Through the Ashes : The Complete Series