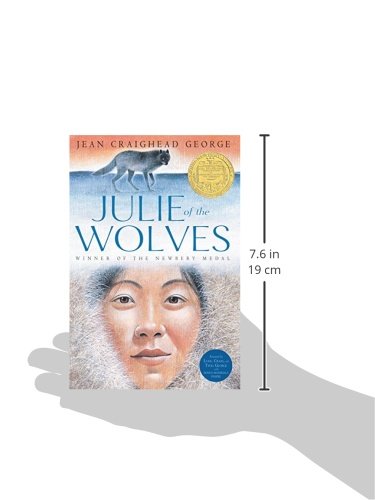 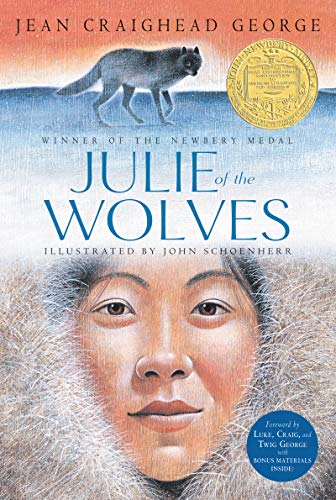 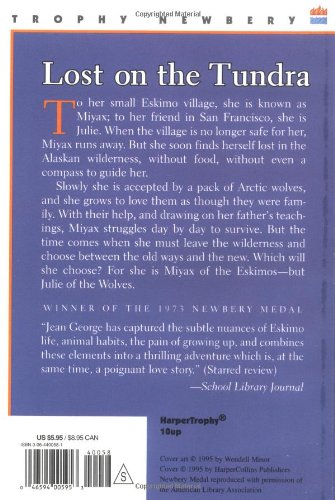 Product Description The thrilling Newbery Medal–winning classic about an Eskimo girl lost on the Alaskan tundra.  Julie of the Wolves is a staple in the canon of children’s literature and the first in the Julie trilogy. The survival theme makes it a good pick for readers of wilderness adventures such as My Side of the Mountain, Hatchet, or Island of the Blue Dolphins. This edition, perfect for classroom or home use, includes John Schoenherr’s original scratchboard illustrations throughout, as well as bonus materials such as an introduction written by Jean Craighead George’s children, the author’s Newbery acceptance speech, selections from her field notebooks, a discussion guide, and a further reading guide. To her small Eskimo village, she is known as Miyax; to her friend in San Francisco, she is Julie. When her life in the village becomes dangerous, Miyax runs away, only to find herself lost in the Alaskan wilderness. Miyax tries to survive by copying the ways of a pack of wolves and soon grows to love her new wolf family. Life in the wilderness is a struggle, but when she finds her way back to civilization, Miyax is torn between her old and new lives. Is she Miyax of the Eskimos—or Julie of the wolves? Don't miss any of the books in Jean Craighead George's groundbreaking series: Julie of the Wolves, Julie, and Julie's Wolf Pack. Review “The whole book has a rare, intense reality which the artist enhances beautifully with animated drawings.” -- The Horn Book ★ “Jean George has captured the subtle nuances of Eskimo life, animal habits, the pain of growing up, and combines these elements into a thrilling adventure which is, at the same time, a poignant love story.” -- School Library Journal (starred review) “It is a book anyone who loves the outdoors will find hard to forget.” -- Boston Globe ★ “[Julie’s] patient, intelligent courting of the animals and her resourcefulness in keeping herself alive are meticulously observed.” -- Kirkus Reviews  (starred review) “Similar to Hatchet by Gary Paulsen, Julie of the Wolves is a story about survival.” (from the article “ 15 Banned Books Every Tween and Teen Should Read”) -- Brightly “[Jean Craighead George’s] novel is packed with expert wolf lore, its narrative beautifully conveying the sweeping vastness of tundra as well as many other aspects of the Arctic, ancient and modern, animal and human. It is refreshing to see the Arctic well portrayed through a woman’s eyes.” -- New York Times “The evocatively written, empathetic story effectively evokes the nature of wolves and dramatizes how the traditional Eskimo way of life is giving way before the relentless onslaught of civilization.” -- ALA Booklist From the Back Cover Lost on the Tundra To her small Eskimo village, she is known as Miyax; to her friend in San Francisco, she is Julie. When the village is no longer safe for her, Miyax runs away. But she soon finds herself lost in the Alaskan wilderness, without food, without even a compass to guide her. Slowly she is accepted by a pack of Arctic wolves, Mid she grows to love them as though they were family. With their help, and drawing on her father's teachings, Miyax struggles day by clay to survive. But the time comes when she must leave the wilderness and choose between the old ways an(] the new. Which will she choose? For she is Miyax of the Eskimos--but Julie of the Wolves. Faced with the prospect of a disagreeable arranged marriage or a journey acoss the barren Alaskan tundra, 13-year-old Miyax chooses the tundra. She finds herself caught between the traditional Eskimo ways and the modern ways of the whites. Miyax, or Julie as her pen pal Amy calls her, sets out alone to visit Amy in San Francisco, a world far away from Eskimo culture and the frozen land of Alaska. During her long and arduous journey, Miyax comes to appreciate the value of her Eskimo heritage, learns about herself, and wins the friednship of a pack of wolves. After learning the language of the w

Amazing
Great
Average
High
It's not a good time to buy now, there's a 48% probability this price will decrease. Our advice is to Watch it.
Buy on Amazon

Julie Of The Wolves Harperclassics, is it available on Amazon?

Yes! But at Pricepulse we inform you when is the lowest price to buy the Julie Of The Wolves Harperclassics

Should I buy the Julie Of The Wolves Harperclassics now?

It's not a good time to buy now, there's a 48% probability this price will decrease. Our advice is to Watch it.

What is the current price of Julie Of The Wolves Harperclassics?

What was the lowest price for the Julie Of The Wolves Harperclassics?