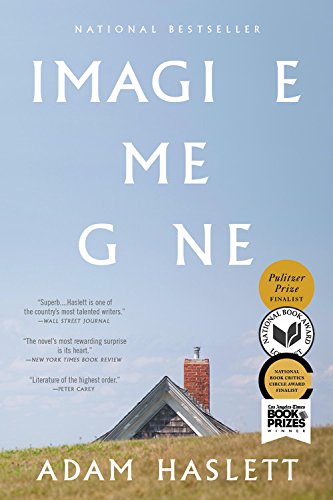 Product Description From a Pulitzer Prize and National Book Award finalist, a ferociously intimate story of a family facing the ultimate question: how far will we go to save the people we love the most? When Margaret's fiancée, John, is hospitalized for depression in 1960s London, she faces a choice: carry on with their plans despite what she now knows of his condition, or back away from the suffering it may bring her. She decides to marry him. Imagine Me Gone is the unforgettable story of what unfolds from this act of love and faith. At the heart of it is their eldest son, Michael, a brilliant, anxious music fanatic who makes sense of the world through parody. Over the span of decades, his younger siblings -- the savvy and responsible Celia and the ambitious and tightly controlled Alec -- struggle along with their mother to care for Michael's increasingly troubled and precarious existence. Told in alternating points of view by all five members of the family, this searing, gut-wrenching, and yet frequently hilarious novel brings alive with remarkable depth and poignancy the love of a mother for her children, the often inescapable devotion siblings feel toward one another, and the legacy of a father's pain in the life of a family. With his striking emotional precision and lively, inventive language, Adam Haslett has given us something rare: a novel with the power to change how we see the most important people in our lives. "Haslett is one of the country's most talented writers, equipped with a sixth sense for characterization"- Wall Street Journal "Ambitious and stirring . . . With Imagine Me Gone , Haslett has reached another level."- New York Times Book Review Review Praise for Imagine Me Gone:"Haslett is one of the country's most talented writers, equipped with a sixth sense for characterization and a limber, unpretentious style. Perhaps his rarest gift is the apprehension of the invisible connections that tie people together...The chapters seamlessly negotiate the passage of time...[Oldest son] Michael comes to dominate the narrative, and Haslett perfectly captures the qualities that make him both seductive and infuriating. He is a motormouth with a fitful imagination and a wicked sense of humor; his nervous energy and 'ceaseless brain' are the battery power on which the whole family runs...Haslett is alert to the reality of others, and the insinuating power of this novel comes from its framing of mental illness as a family affair. Michael's siblings are both wholly convincing characters, shaped by the abiding question of how much, or how little, they are meant to act as their brother's keepers...Most affecting of all is Margaret, who is treated with impatience by her children but possesses a capacious understanding...'What do you fear when you fear everything?' Michael wonders. 'Time passing and not passing. Death and life....This being the condition itself: the relentless need to escape a moment that never ends.' That condition, Haslett's superb novel shows, is an irreducible part of the fabric of Michael's family, as true and defining as the love that binds them." ― Sam Sacks, Wall Street Journal "Ambitious and stirring . . . With Imagine Me Gone, Haslett has reached another level, affording readers a full and luminous depiction of a mind under siege . . . By putting the readers in the same position as [oldest son] Michael's family members, Haslett has pulled off something of a brilliant trick: We feel precisely what they feel-the frustration, the protectiveness, the hope and fear and, yes, the obligation. If Michael is on the page, if his thoughts or actions are laid bare, there's a grueling sense of dread. If he's out of sight, if his thinking and whereabouts are unknown, the dread becomes all but unbearable . . . This is a book refreshingly replete with surprise. It sneaks up on you with dark and winning humor, poignant tenderness, and sentences so astute that they lift the spirit even when they'