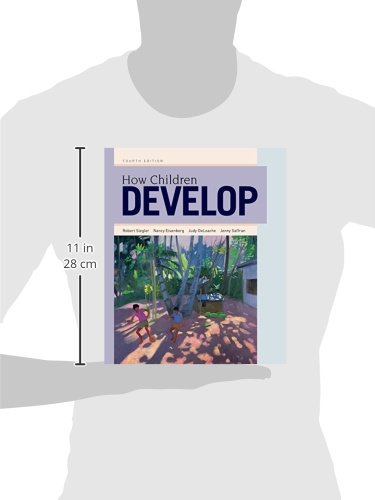 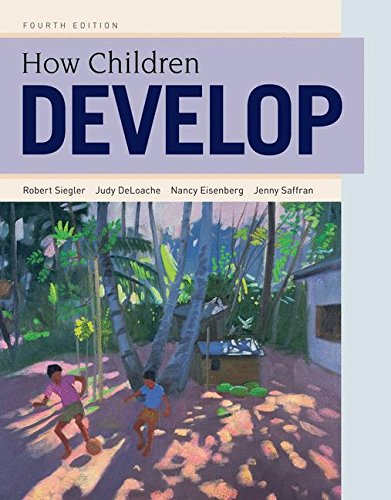 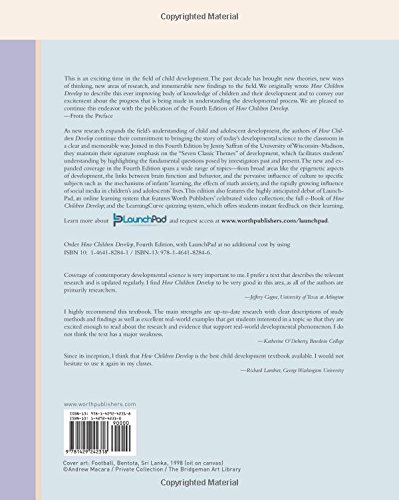 Product Description Note: This book is standalone book and will not include access code. With How Children Develop, students get an up-to-date, topically-organized introduction to child development, presented by researchers and teachers who themselves are guiding the field into new directions. The authors emphasize fundamental principles, enduring themes, and important recent studies, avoiding excessive detail and making typically difficult topics easier to grasp. This thoroughly updated edition welcomes new co-author Jenny Saffran, and is accompanied by an expanded media package. About the Author Robert Siegler is the Teresa Heinz Professor of Cognitive Psychology at Carnegie Mellon University. He is the author of the cognitive development textbook Children's Thinking and has written or edited several additional books on child development. His books have been translated into Japanese, Korean, Spanish, French, and Portuguese. In the past few years, he has presented keynote addresses at the conventions of the Cognitive Development Society, the International Society for the Study of Behavioral Development, the Japanese Psychological Association, the Eastern Psychological Association, and the Conference on Human Development. He also served as Associate Editor of the journal Developmental Psychology, co-edited the cognitive development volume of the 2006 Handbook of Child Psychology, and served on the National Mathematics Advisory Panel from 2006-2008. In 2005, Dr. Siegler received the American Psychological Association's Distinguished Scientific Contribution Award. Judy DeLoache is the William R. Kenan Jr. Professor of Psychology at the University of Virginia. She has published extensively on aspects of cognitive development in infants and young children. Dr. DeLoache has served as president of the Developmental Division of the American Psychological Association and as a member of the executive board of the International Society for the Study of Infancy. She is currently the president-elect of the Cognitive Development Society. She has presented major invited addresses at professional meetings, including the Association for Psychological Science and the Society for Research on Child Development. Dr. DeLoache is the holder of a Scientific MERIT Award from the National Institutes of Health, and her research is also funded by the National Science Foundation. She has been a fellow at the Center for Advanced Study in the Behavioral Sciences and the Rockefeller Foundation Study Center in Bellagio, Italy. She was recently inducted into the National Academy of Arts and Sciences. "

Amazing
Great
Average
High
This is a great price to buy! There's a 83% probability this price will be higher. Our advice is Buy it now.
Buy on Amazon

How Children Develop Standalone Book, is it available on Amazon?

Yes! But at Pricepulse we inform you when is the lowest price to buy the How Children Develop Standalone Book

Should I buy the How Children Develop Standalone Book now?

This is a great price to buy! There's a 83% probability this price will be higher. Our advice is Buy it now.

What is the current price of How Children Develop Standalone Book?

What was the lowest price for the How Children Develop Standalone Book?