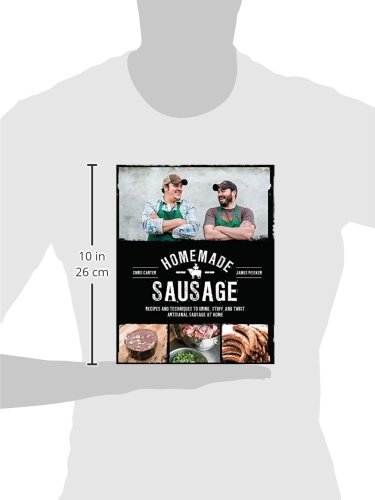 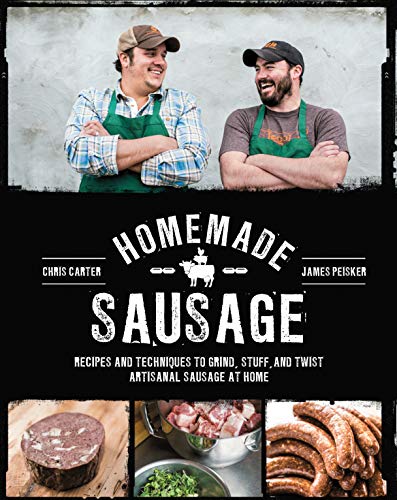 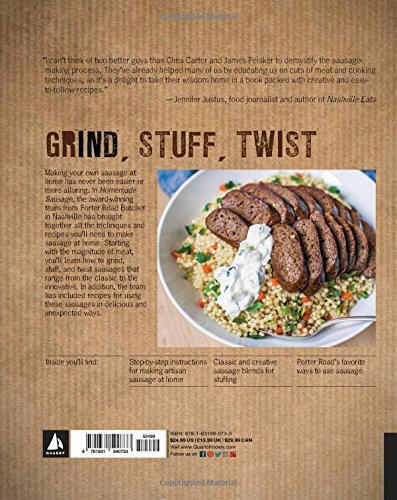 Product Description The secret's out! Get cooking the very best homemade sausage with techniques from Nashville's Porter Road Butcher.Homemade Sausage is an extremely accessible guide for making sausage right in your own kitchen. James Peisker and Chris Carter of Nashville's Porter Road Butcher will guide you through all the necessary steps to create the very best sausage - just like they do.Learn important information on sourcing your meat from local farms for the highest quality and top flavor. From there, you'll discover techniques and trade secrets for grinding. You'll even find a list of the best tools for the job and how to use them successfully.Now comes the fun part, seasoning your sausage to create deep flavor profiles is one of the greatest benefits of making sausage at home. You control the spices, sodium, and more!Stuff and smoke your sausage - or don't- and create classic links, patties, brats, keilbasas, chorizos, andouilles, and more!Finally, enjoy your locally sourced, perfectly flavored sausage in mouth-watering recipes, like:Tomato Meat Sauce with ItalianBreakfast PinwheelsBangers and MashBratwurst with Sauerkraut and MustardJambalaya with AndouilleHot Chicken Sausage SandwichChorizo TortaMerguez with CouscousBoudin BallsCotechinno and Lentils – Italian New Years DishBeer-Braised Bratwurst with whole grain mustard and sauerkrautRoasted Currywurst with spatzle and braised cabbageGrilled Kielbasa with Roasted Potatoes and Chimichurri SauceWhether you're a beginner or a seasoned pro, Homemade Sausage is your go-to guide for making better sausage. Review "Chris and James have become the go-to meat producers in town and have done so seemingly overnight. The care they take with every animal, every cut of meat and every sausage they make is not only impressive but it makes you never want to buy meat anywhere else. This book is so exciting because it shows anyone how to make sausage the right way and Chris and James make it simple and easy. In a world of large-scale mass meat production, this is a refreshing reminder that making something on your own is not only more fun but also much more rewarding than cooking something store-bought." - Andy Nelson, Head Distiller, Nelson's Green Brier Distillery"I can't think of two better guys to demystify the sausage-making process than Chris Carter and James Peisker. They've already helped so many of us at their shop by educating on cuts of meat and cooking techniques, so it's a delight to take their wisdom home in a book packed with creative and easy-to-follow recipes. - Jennifer Justus, food journalist and author of Nashville Eats"I had the pleasure of working with James years ago, and some things never change. James and Chris have an endless thirst for knowledge that lets them pursue their craft like no one can. It is very exciting to see them share some of that cherished knowledge with the rest of us. This book will be a staple on both my home and work kitchen shelf." - Gerard Craft, James Beard Award winning Executive Chef and Owner of Niche Food Group About the Author James Peisker initially embarked on his culinary career when he was just 14 years old, working as a busboy in the diner that sat just across the street from his St. Louis home. After working his way up to a server, James was eager to continue his culinary education, so after graduating from high school, he spent time working in the kitchen at The Gatesway Home where the chefs taught him the foundations of his culinary knowledge. He competed with the American Culinary Federation State Junior Team during the short time he spent at Forest Park Community College, an experience which eventually inspired him to attended The Culinary Institute of America in Hyde Park, New York. Immediately after graduating, he spent two weeks studying at the Sichuan Higher Institute of Cuisine in China, and soon made his way back to St. Louis where he took charge of the city's culinary scene.James became th

Homemade Sausage Recipes And Techniques To Grind S, is it available on Amazon?

Yes! But at Pricepulse we inform you when is the lowest price to buy the Homemade Sausage Recipes And Techniques To Grind S

Should I buy the Homemade Sausage Recipes And Techniques To Grind S now?

What is the current price of Homemade Sausage Recipes And Techniques To Grind S?

What was the lowest price for the Homemade Sausage Recipes And Techniques To Grind S?