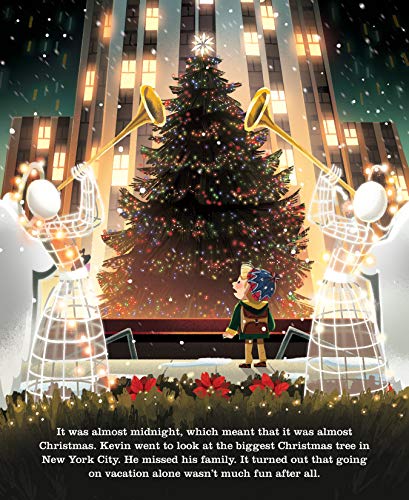 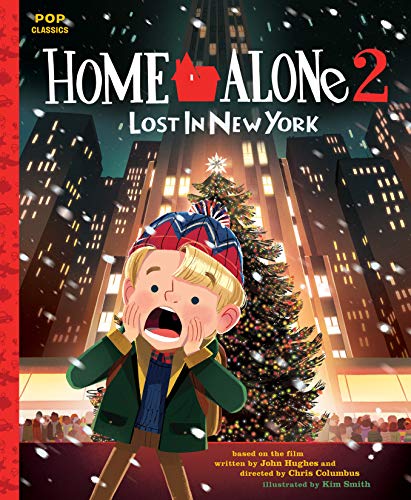 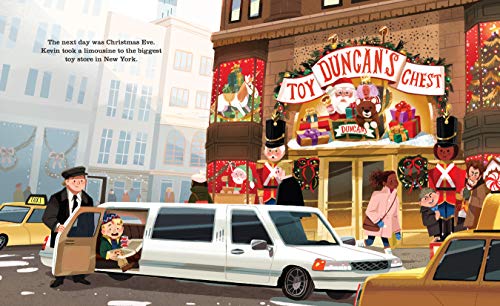 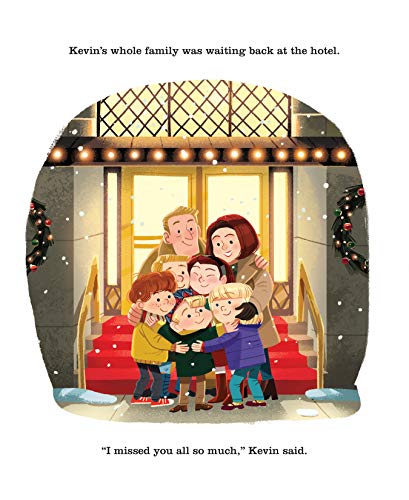 Product Description YIKES! Kevin did it again! The beloved sequel to Home Alone is now an adorable picture book for the whole family.   It’s the holidays and Kevin doesn’t want to go on his family vacation to Florida. Amid the chaos and confusion of the airport, he accidentally boards the wrong plane and ends up alone (again!) in New York City. Kevin goes sightseeing, checks into a hotel, and enjoys limo rides, all courtesy of his dad’s credit card. But then he makes a shocking discovery: the burglars who tried to rob his house last year are back, and this time they plan to rob a toy store on Christmas Eve! Can Kevin stop them and save Christmas with the help of some new friends? Charmingly illustrated by Kim Smith, this sweet and funny adaptation will delight fans of the  Home Alone franchise, young and old alike. Review “The holiday picture book of the season.”— Dad Suggests“Delightful.” —Under the Radar“Celebrates the classic movie with delightful illustrations that make it stand out from the film all while complimenting it.” —Cracking the Cover“The perfect book for little ones to enjoy as chestnuts are roasting on an open fire and Santa is checking his list twice.”— But Why Tho?, 4.5 out of 5 star review “Contains full color illustrations that really make the story pop off the page and come to life...My girls really enjoyed the book, and said they loved the lifelike illustrations, as they were like nothing they have seen in other kid's picture books.”— Inspired by Savannah Praise for other books in the Pop Classics series: “Thanks to the delightful illustrations of Kim Smith, families can bond over the lovable alien and his friendship with Elliot in book form.”—Jami Ganz,  Entertainment Weekly, on  E.T. the Extra-Terrestrial  “I was quickly won over by the charm of the writing and the awesome illustrations. Kim Smith's drawings have a distinctive style that imbues life into every single page.”— Sweety High, on  Buffy the Vampire Slayer   “A lovely trip down memory lane that you can share with your little ones.”— Neatorama, on  Back to the Future   “Smith’s art is excellent. . . . Her illustrations do a terrific job summing up the key moments of the movie, creating a rich picture of what happens in the film in only 40 pages.”— Comics Worth Reading, on  The Karate Kid   “Kids will delight in the spooky-but goofy story and the surprise at the end, and parents will chuckle at this new take on an old favorite.”— GeekDad, on  The X-Files: Earth Children Are Weird “ Home Alone: The Classic Illustrated Storybook offers all the fun of the original movie in a darling hardcover package whose read-aloud story teaches lessons about responsibility and the importance of family.”—Pop Culture Insider, on  Home Alone About the Author John Hughes wrote the story and screenplays for  Home Alone and  Home Alone 2. He also wrote and directed many popular films for teenagers and adults, including  The Breakfast Club and  Ferris Bueller’s Day Off. Chris Columbus directed  Home Alone and  Home Alone 2 as well as many other celebrated family films, including  Mrs. Doubtfire and  Harry Potter and the Sorcerer’s Stone.   Kim Smith is the illustrator behind the Quirk Books Pop Classics series, including  Home Alone,  Home Alone 2, The X-Files: Earth Children Are Weird,  E.T. the Extra-Terrestrial,  Back to the Future,  Buffy the Vampire Slayer,  The Karate Kid, and  Doctor Who: The Runaway TARDIS. She has illustrated several other children’s books, including  The Great Puppy Invasion (Houghton Mifflin Harcourt, 2017),  Builder Brothers: Big Plans (HarperCollins, 2018), and  Boxitects (Clarion Books, 2020), her author/illustrator debut. Kim lives in Calgary, Alberta with her dog, Whisky, and husband, Eric. Visit her online at kimillustration.com.

Current price$9.49
Since 21 days
Average price$11.23
Based on 20 months
Lowest price ever$9.49
21 days ago
Highest price ever$18.99
20 months ago
Amazing
Great
Average
High
This is absolutely the best time to buy. Don’t miss out, there's 32% probability of this price being higher soon. Buy now.
Buy on Amazon

Back to the Future: The Classic Illustrated Storybook (Pop Classics)

It's a Wonderful Life: The Illustrated Holiday Classic

Back to the Future: The Classic Illustrated Storybook (Pop Classics)

It's a Wonderful Life: The Illustrated Holiday Classic

Thunderhead (Arc of a Scythe)

Home Alone 2 Lost In New York The Classic Illustra, is it available on Amazon?

Yes! But at Pricepulse we inform you when is the lowest price to buy the Home Alone 2 Lost In New York The Classic Illustra

Should I buy the Home Alone 2 Lost In New York The Classic Illustra now?

This is absolutely the best time to buy. Don’t miss out, there's 32% probability of this price being higher soon. Buy now.

What is the current price of Home Alone 2 Lost In New York The Classic Illustra?

What was the lowest price for the Home Alone 2 Lost In New York The Classic Illustra?