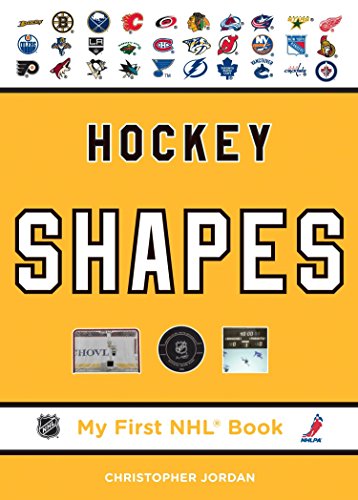 Product Description What better way to introduce your child to the entertaining, action-packed world of hockey than through a new series of books aimed at the youngest of hockey fans? Published through the combined efforts of the NHL, the NHLPA and Fenn/Tundra, My First NHL Books introduce preschool readers to the essential early concepts of learning through the fun and entertaining themes of hockey.   Count players, sticks and Stanley cups, explore the colours of the rainbow through team logos and sweaters; look for familiar shapes amongst pucks, scoreboards and nets, and work your way through an alphabet that includes everything from A is for Arena to Z is for Zamboni, and everything hockey in between. About the Author Christopher Jordan learned to skate before the age of two on frozen waters at his family's cottage on Lake Muskoka. It wasn't long before his parents first put a hockey stick in his hands and his love for hockey began. A published children's book author and hopeful Leafs fan, Jordan is now introducing hockey to his own children with the hope of becoming an NHL dad someday. Residing in Toronto, Canada, Jordan and his wife Kim have three remarkable children, Stewart, Duncan, and Jacqeline. His published books inlude: The Little Beaver, Hockey ABC, Hockey 123, Hockey Shapes, and Hockey Colours.

Amazing
Great
Average
High
This is a great price to buy! There's a 20% probability this price will be higher. Our advice is Buy it now.
Buy on Amazon

My Preschool Workbook: 101 Games & Activities that Prepare Your Child for School (My Workbook)

The Monster at the End of This Book

Hockey Shapes My First Nhl Book, is it available on Amazon?

Yes! But at Pricepulse we inform you when is the lowest price to buy the Hockey Shapes My First Nhl Book

Should I buy the Hockey Shapes My First Nhl Book now?

This is a great price to buy! There's a 20% probability this price will be higher. Our advice is Buy it now.

What is the current price of Hockey Shapes My First Nhl Book?

What was the lowest price for the Hockey Shapes My First Nhl Book?