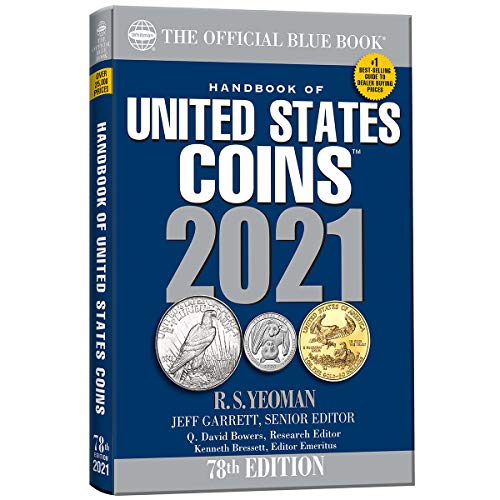 Product Description Whitman Publishing debuted the Handbook of United States Coins in 1942 as an authoritative resource showing how much coin dealers were paying on average to buy U.S. coins by type, date, and mintmark. The groundbreaking new book was an immediate hit, popular with dealers and collectors alike. For more than 77 years coin dealers have used the OFFICIAL BLUE BOOK  (as it came to be known) to make buying offers. As a collector, you can use it to find out how much your coins are worth! The Blue Book's price listings offer a real-world look at the coin market, gathered from dealers around the country. The new 78th edition includes updated prices, special features, and many new photographs. Coverage includes colonial and early American Coins, federal coins (half-cents through gold double eagles), commemoratives, Proof sets, die varieties, private and territorial gold, tokens, the newest Presidential dollars, National Park quarters, bullion coins, and other United States Mint products. More than 24,000 prices in multiple grades. Easy-to-follow coin-grading instructions. Coins and tokens from the 1600s to today. Historical information, hundreds of detailed, actual-size photos. How to start a coin collection. Detailed mintage records, and much more. About the Author Jeff Garrett, founder of Mid-American Rare Coin Galleries, is considered one of the nation s top experts in U.S. coinage and knowledge lies at the foundation of Jeff s numismatic career. With more than 45 years of experience, he is one of the top experts in numismatics. The experts expert, Jeff has personally bought and sold nearly every U.S. coin ever issued. Not a day goes by that someone doesn t call on Jeff Garrett for numismatic advice. This includes many of the nation s largest coin dealers, publishers, museums and institutions, including the Smithsonian Institute s American History Museum where Garett is a board member and trusted consultant. In addition to owning and operating Mid-American Rare Coin Galleries, Jeff Garrett is a major shareholder in Sarasota Rare Coin Galleries. His combined annual sales in rare coins and precious metals between Mid-American in Kentucky and Sarasota Rare Coin Galleries in Florida total more than $25 million. Jeff has been a member of the prestigious Professional Numismatic Guild (PNG) since 1982 and has served as president of the organization. Jeff also served as the ANA president from 2015 until 2017. Jeff Garrett Biographical Highlights ANA life member since 1975 Elected as American Numismatic Association President (2015-2017) Elected as American Numismatic Association Vice-President (2013-2015) Elected to the American Numismatic Association Board of Governors, 2009 and 2011 Professional Numismatic Guild (PNG), member since 1982 Past president, vice president and treasurer of the PNG Recipient of the PNG Lifetime Achievement Award Recipient of the PNG Abe Kosoff Founders Award Recipient of the PNG Art Kagin Ambassador Award Author of 100 Greatest U.S. Coins (NLG 2003 Book of the Year) Author of United States Coinage: A Study By Type Author of Encyclopedia of United States Gold Coinage: 1795 1933, Circulating, Proof, Commemorative, and Pattern Issues Editor of The Official Redbook: A Guide Book of United States Coins Consultant to the Smithsonian Institution s National Numismatic Collection, Washington, D.C. AND Board member of the Smithsonian Museum of American History. Consultant to Numismatic Guaranty Corporation (NGC) Founder of the Bluegrass Coin Club 1994

Yes! But at Pricepulse we inform you when is the lowest price to buy the Handbook Of United States Coins 2021 Handbook Of U