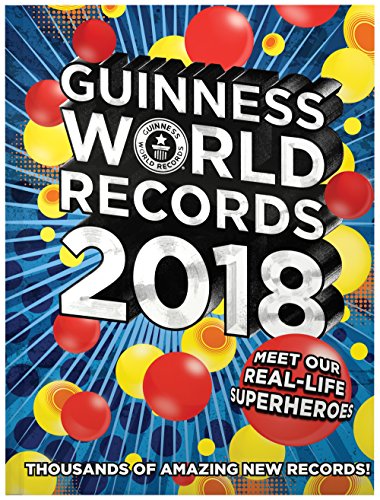 Product Description The record-breaking records annual is back and packed with more incredible accomplishments, stunts, cutting-edge science and amazing sporting achievements than ever before. With more than 3,000 new and updated records and 1,000 eye-popping photos, it has thousands of new stats and facts and dazzling new features.There is so much to explore inside. Go on a whirlwind tour of the planet’s most amazing places, from the largest swamps to the deepest points on Earth. Find out what happens when you give an octopus a Rubik’s Cube, and why all you need to defend yourself from a crocodile is a rubber band! You’ll also find all your favorite records and categories such as Big Stuff, Collections, Mass Participation and Fun with Food, plus the year’s most significant sporting achievements.Our editors have also taken inspiration this year from the world of superheroes – both fictional and real-world – so look out for our feature chapter charting your favorite caped crusaders in comic books, TV shows and movies. We also meet the real-life record-breakers with genuine superpowers, such as the Canadian strongman vicar who can pull a jumbo jet and an actual cyborg who uses technology to augment his senses. You’ll also learn all about the science of superheroes, such as who the fastest and strongest superheroes would be if they came to life, and who would win in a royal rumble between Superman, Batman, Hulk and Dr Strange!Also new this year is a celebration of the superlative with infographic poster pages that explore the most exciting absolutes, such as the longest, tallest, fastest and heaviest. Does the longest sofa outstretch the longest train? Is the tallest Easter egg bigger than the tallest snowman? Find out in this amazing new edition. You’ll also find these special pages available as free poster downloads at guinnessworldrecords.com!From science to showbiz via stunts and sports, there are real-life heroes all around us in all shapes and sizes, achieving the extraordinary every day. There’s only one book where you’ll find so many amazing facts all in one place, and that’s Guinness World Records 2018! From School Library Journal Gr 3–6—It's hard for anyone interested in trivia or pop culture to ignore the lure of a new Guinness book. Kids will want to get their hands on this shiny, metallic, oversize volume. There are more categories than ever, including "most underpants pulled on in one minute!" But there are serious topics as well and lots of spotlights and photos of people who unleash their "inner superheroes." A chapter honors imaginary superheroes, while another section recognizes real "superhumans." The book lets readers know that they, too, can be the best in whatever they attempt, be it strength, endurance, intelligence, or persistence. There are copious records devoted to sports, transportation, animals, and music and pop culture. Preteens will likely be excited to learn about the highest-earning celebrities. And don't miss the eating records, such as the fastest time to drink a bottle of ketchup (32.37 seconds). VERDICT A solid addition to most collections, especially where additional facts or trivia offerings are needed.—Sharon Verbeten, Brown County Library, Green Bay, WI About the Author GUINNESS WORLD RECORDS (GWR) is the global authority on record-breaking achievement. First published in 1955, the iconic annual Guinness World Records books have sold over 138 million copies in over 20 languages and in more than 100 countries. Additionally, the Guinness World Records: Gamer’s Edition, first published in 2007, has sold more than 5 million copies to date.Guinness World Records’ worldwide television programs reach over 750 million viewers annually and more than one million people subscribe to the GWR YouTube channel, which enjoys more than 300 million views per year. The GWR website receives 21 million visitors annually, and we have over 12 million fans on Facebook. The Guinness World

Amazing
Great
Average
High
This is absolutely the best time to buy. Don’t miss out, there's 73% probability of this price being higher soon. Buy now.
Buy on Amazon

Guinness World Records 2018 Meet Our Real Life Sup, is it available on Amazon?

Yes! But at Pricepulse we inform you when is the lowest price to buy the Guinness World Records 2018 Meet Our Real Life Sup

Should I buy the Guinness World Records 2018 Meet Our Real Life Sup now?

This is absolutely the best time to buy. Don’t miss out, there's 73% probability of this price being higher soon. Buy now.

What is the current price of Guinness World Records 2018 Meet Our Real Life Sup?

What was the lowest price for the Guinness World Records 2018 Meet Our Real Life Sup?