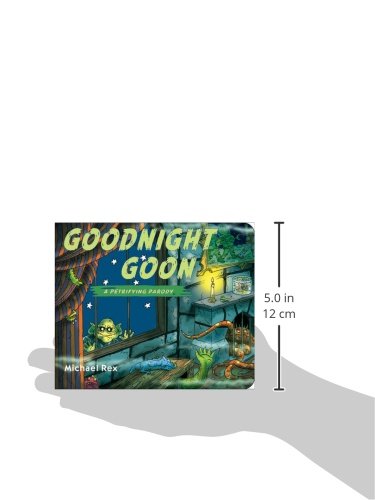 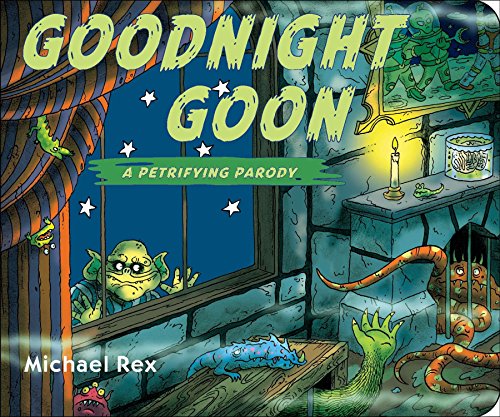 Product Description The #1 New York Times bestselling picture book parody is a must-have hilarious read-aloud! Goodnight tomb. Goodnight goon. Goodnight Martians taking over the moon.It's bedtime in the cold gray tomb with a black lagoon, and two slimy claws, and a couple of jaws, and a skull and a shoe and a pot full of goo. But as a little werewolf settles down, in comes the Goon determined at all costs to run amok and not let any monster have his rest.A beloved classic gets a kind-hearted send up in this utterly monsterized parody; energetic art and clever text will have kids begging to read this again and again. Review "A clever offering just right for graduates of bedtimes with  Goodnight Moon." — School Library Journal"[A] snort-inducing parody of one of children's literature's most sacred texts . . . . [W]hat fun it is." — Kirkus Reviews "[A] lot of fun, and it may inspire kidsto come up with their own retellings of other familiar classics." — The Bulletin of the Center for Children's Books About the Author Michael Rex has written and illustrated over 40 books for children, including the gruesomely hysterical, #1 New York Times bestseller Goodnight Goon. His popular sword-swinging Fangbone! Graphic novels have been turned into an animated show that runs on Disney XD in the U.S., and many other markets worldwide. He visits schools across the country and internationally to share his books with students of all ages, and he has a master’s degree in Arts Education. His work covers a wide range of styles, from the simple, goofy rhymes of Truck Duck, to the heavily illustrated, yuck-filled Icky Ricky chapter books. He lives in New Jersey with his wife, two boys, and a dog named Roxy.

How to Catch a Monster

How to Catch a Monster

Goodnight Goon A Petrifying Parody, is it available on Amazon?

Yes! But at Pricepulse we inform you when is the lowest price to buy the Goodnight Goon A Petrifying Parody

Should I buy the Goodnight Goon A Petrifying Parody now?

What is the current price of Goodnight Goon A Petrifying Parody?

What was the lowest price for the Goodnight Goon A Petrifying Parody?