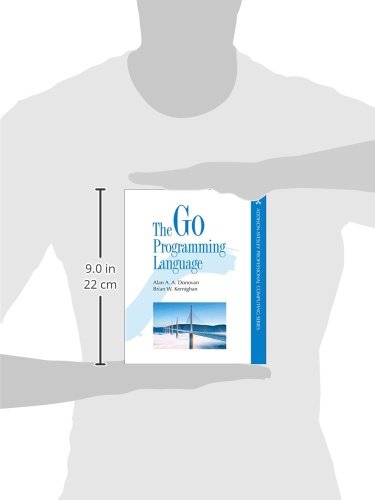 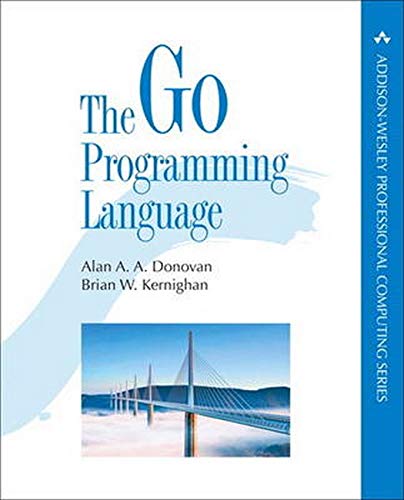 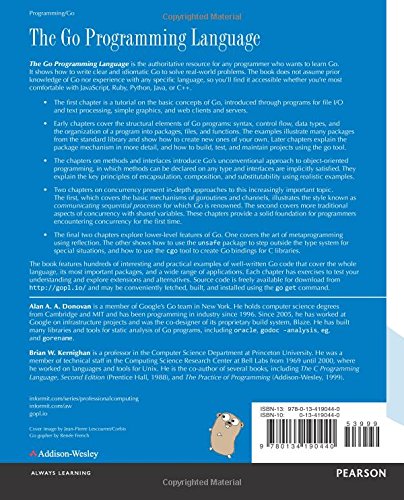 Product Description The Go Programming Language is the authoritative resource for any programmer who wants to learn Go. It shows how to write clear and idiomatic Go to solve real-world problems. The book does not assume prior knowledge of Go nor experience with any specific language, so you’ll find it accessible whether you’re most comfortable with JavaScript, Ruby, Python, Java, or C++. The first chapter is a tutorial on the basic concepts of Go, introduced through programs for file I/O and text processing, simple graphics, and web clients and servers. Early chapters cover the structural elements of Go programs: syntax, control flow, data types, and the organization of a program into packages, files, and functions. The examples illustrate many packages from the standard library and show how to create new ones of your own. Later chapters explain the package mechanism in more detail, and how to build, test, and maintain projects using the go tool. The chapters on methods and interfaces introduce Go’s unconventional approach to object-oriented programming, in which methods can be declared on any type and interfaces are implicitly satisfied. They explain the key principles of encapsulation, composition, and substitutability using realistic examples. Two chapters on concurrency present in-depth approaches to this increasingly important topic. The first, which covers the basic mechanisms of goroutines and channels, illustrates the style known as communicating sequential processes for which Go is renowned. The second covers more traditional aspects of concurrency with shared variables. These chapters provide a solid foundation for programmers encountering concurrency for the first time. The final two chapters explore lower-level features of Go. One covers the art of metaprogramming using reflection. The other shows how to use the unsafe package to step outside the type system for special situations, and how to use the cgo tool to create Go bindings for C libraries. The book features hundreds of interesting and practical examples of well-written Go code that cover the whole language, its most important packages, and a wide range of applications. Each chapter has exercises to test your understanding and explore extensions and alternatives. Source code is freely available for download from http://gopl.io/ and may be conveniently fetched, built, and installed using the go get command. About the Author Alan A. A. Donovan is a member of Google’s Go team in New York. He holds computer science degrees from Cambridge and MIT and has been programming in industry since 1996. Since 2005, he has worked at Google on infrastructure projects and was the co-designer of its proprietary build system, Blaze. He has built many libraries and tools for static analysis of Go programs, including oracle, godoc -analysis, eg, and gorename.   Brian W. Kernighan is a professor in the Computer Science Department at Princeton University. He was a member of technical staff in the Computing Science Research Center at Bell Labs from 1969 until 2000, where he worked on languages and tools for Unix. He is the co-author of several books, including The C Programming Language, Second Edition (Prentice Hall, 1988), and The Practice of Programming (Addison-Wesley, 1999).

Current price$35.15
Since 56 days
Average price$27.27
Based on 5 years
Lowest price ever$16.83
4 years ago
Highest price ever$37.30
4 years ago
Amazing
Great
Average
High
It's not a good time to buy now, there's a 69% probability this price will decrease. Our advise is to Watch it.
Buy on Amazon

The Computer Programming Bible: A Step by Step Guide On How To Master From The Basics to Advanced of Python, C, C++, C#, HTML Coding Raspberry Pi3

The Computer Programming Bible: A Step by Step Guide On How To Master From The Basics to Advanced of Python, C, C++, C#, HTML Coding Raspberry Pi3

Go Programming Language The Addison Wesley Profess, is it available on Amazon?

Yes! But at Pricepulse we inform you when is the lowest price to buy the Go Programming Language The Addison Wesley Profess

Should I buy the Go Programming Language The Addison Wesley Profess now?

It's not a good time to buy now, there's a 69% probability this price will decrease. Our advise is to Watch it.

What is the current price of Go Programming Language The Addison Wesley Profess?

What was the lowest price for the Go Programming Language The Addison Wesley Profess?