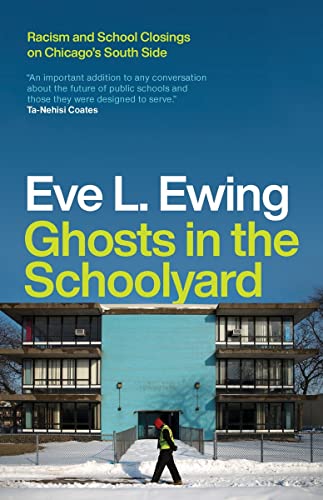 Product Description “Failing schools. Underprivileged schools. Just plain bad schools.”   That’s how Eve L. Ewing opens Ghosts in the Schoolyard: describing Chicago Public Schools from the outside. The way politicians and pundits and parents of kids who attend other schools talk about them, with a mix of pity and contempt.   But Ewing knows Chicago Public Schools from the inside: as a student, then a teacher, and now a scholar who studies them. And that perspective has shown her that public schools are not buildings full of failures—they’re an integral part of their neighborhoods, at the heart of their communities, storehouses of history and memory that bring people together.   Never was that role more apparent than in 2013 when Mayor Rahm Emanuel announced an unprecedented wave of school closings. Pitched simultaneously as a solution to a budget problem, a response to declining enrollments, and a chance to purge bad schools that were dragging down the whole system, the plan was met with a roar of protest from parents, students, and teachers. But if these schools were so bad, why did people care so much about keeping them open, to the point that some would even go on a hunger strike?   Ewing’s answer begins with a story of systemic racism, inequality, bad faith, and distrust that stretches deep into Chicago history. Rooting her exploration in the historic African American neighborhood of Bronzeville, Ewing reveals that this issue is about much more than just schools. Black communities see the closing of their schools—schools that are certainly less than perfect but that are theirs—as one more in a long line of racist policies. The fight to keep them open is yet another front in the ongoing struggle of black people in America to build successful lives and achieve true self-determination. Review "If only for widening the scope of the debate over public schools, Eve Ewing’s new book is a welcome entry to the conversation. Rejecting the impulse to see education as disconnected from American life and politics, Ghosts in the Schoolyard links the struggles of Chicago public schooling with the city’s notoriously racist housing practices. Ewing peels back the seemingly anodyne messaging of reform ('school choice') and its ostensibly objective standards ('test scores') to reveal the insidious assumptions lying beneath.              Perhaps most importantly, Ewing gives direct voice to those served by those schools often dismissed as failing. What she finds is that these schools are often among the last working institutions in neighborhoods which have been systematically stripped of everything else. Mixing history, sociology, and even memoir, Ghosts in the Schoolyard is an important addition to any conversation about the future of public schools and those they were designed to serve."   -- Ta-Nehisi Coates"What makes this book more than an inflated explainer on racism and school closings is Ewing’s analytic methods, and in particular how eager she is to share them with the reader. The choices she makes, both as a writer and as a sociologist, are well considered and explained in the text. . . . Ewing is less interested in showing off the depth of her reading than in convincing us that theory is more aligned with our experiential knowledge than we might otherwise think. One of the clearest signs of her lack of egotism is how willing she is to cede analytic insight to the people in her community. . . . Ewing’s mission is to present critical theory and sociology in a way that makes her readers feel capable of enacting both."   ― The Nation"This superbly written and researched account is at once poignant and deeply troubling, blending the personal and the academic in a way that makes the heavy subject matter accessible. Ghosts is essential reading for anyone trying to better understand the intersection of segregation and education--as well as the importance of preserving the public institutions that help shape communities." --

Amazing
Great
Average
High
It's not a good time to buy now, there's a 38% probability this price will decrease. Our advice is to Watch it.
Buy on Amazon

Ghosts In The Schoolyard Racism And School Closing, is it available on Amazon?

Yes! But at Pricepulse we inform you when is the lowest price to buy the Ghosts In The Schoolyard Racism And School Closing

Should I buy the Ghosts In The Schoolyard Racism And School Closing now?

It's not a good time to buy now, there's a 38% probability this price will decrease. Our advice is to Watch it.

What is the current price of Ghosts In The Schoolyard Racism And School Closing?

What was the lowest price for the Ghosts In The Schoolyard Racism And School Closing?