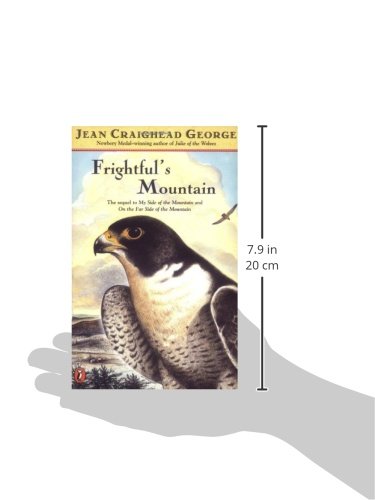 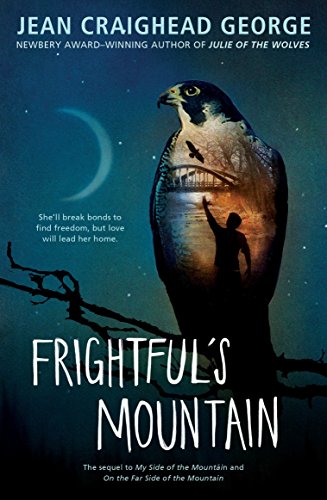 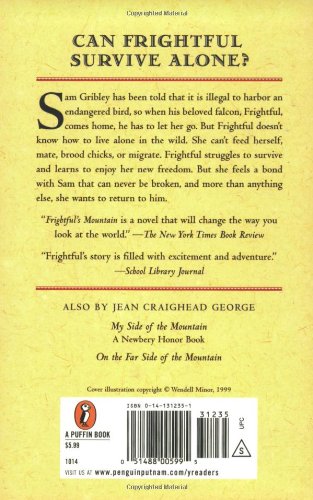 Product Description Can frightful survive alone? Sam Gribley has been told that it is illegal to harbor an endangered bird, so when his beloved falcon, Frightful, comes home, he has to let her go. But Frightful doesn’t know how to live alone in the wild. She can’t feed herself, mate, brood chicks, or migrate. Frightful struggles to survive and learns to enjoy her new freedom. But she feels a bond with Sam that can never be broken, and more than anything else, she wants to return to him. The sequel to  My Side of the Mountain and  On the Far Side of the Mountain from Newbery Medal-winning author Jean Craighead George. “Fans of My Side of the Mountain will be glad to revisit Sam Gribley in this sequel.” —The Horn Book “Frightful’s Mountain is a novel that will change the way you look at the world.” —The New York Times Book Review "Frightful's story is filled with excitement and adventure." —School Library Journal About the Author Jean Craighead George (1919–2012) was the author of more than 100 beloved books for young people, including the Newbery Award–winning  Julie of the Wolves , the  Newbery Honor–winning   My Side of the Mountain,  On the Far Side of the Mountain, and  Frightful's Mountain .  She was a lifetime naturalist and a household name. Her website can be found at www.jeancraigheadgeorge.com. Excerpt. © Reprinted by permission. All rights reserved. Frightful, the peregrine falcon, could not see. A falconer's hood covered her head and eyes She remained quiet and calm, like all daytime birds in the dark. She could hear, however. She listened to the wind whistling through pine needles. This wind-music conjured up images of a strange woods and unknown flowers. The sound was foreign. It was not the soft song of wind humming through the hemlock needles of home. Frightful was a long way from her familiar forest. Suddenly, an all invading passion filled her. She must go. She must find one mountain among thousands, one hemlock tree among millions, and the one boy who called himself Sam Gribley. The one mountain was her territory, the one tree was Sam's house, the perch beside it, her place. And Sam Gribley was life. Chapter One (In Which Frightful Takes Off) Frightful had not been quite two weeks old when she first saw Sam Gribley. He had lifted her from her nest on a cliff. Small as she was, she had jabbed him with her already powerful talons as he carried her to the ground. "I'm going to call you Frightful," he had said. "You're a raving beauty." Then he carried her to the gigantic hemlock tree on the mountain and into its hollowed-out bole. This was Sam's home. He fed her four and five times a day. He carried her on his gloved fist and talked to her. Before long, Frightful thought of him as her mother. He nurtured her like a peregrine falcon.. When she was older, Sam made a perch for her and placed it outside his tree. He taught her to fly to his hand. When she was full grown her took her hunting with him. By now, the memory of her parents was pushed far back in her mind. Sam was her family. At night and on winter days, Sam brought her inside the huge old tree. She perched on his rustic bedstead and warmed herself by the clay fireplace. On spring and summer days, she would sit on her perch outside and watch the birds, the butterflies, and busy Sam. Patiently, she waited for him to take her hunting. It was her greatest pleasure. She loved the sky. She loved the updrafts and coiling winds and she loved "waiting on," hovering above Sam until he kicked up game. Then she stooped, the wind singing in her feathers. Frightful was an excellent hunter who rarely missed. The food was shared. Their lives depended on each other. She must find Sam. Frightful crouched to fly. She could not see. She folded her gray-blue wings to her body and straightened up. Hooded and tethered, she had traveled with two strange men for several days. One of them had taken her from her perch beside the big hemlock tree. He had a dee

Frightfuls Mountain, is it available on Amazon?

Yes! But at Pricepulse we inform you when is the lowest price to buy the Frightfuls Mountain

Should I buy the Frightfuls Mountain now?

What is the current price of Frightfuls Mountain?

What was the lowest price for the Frightfuls Mountain?