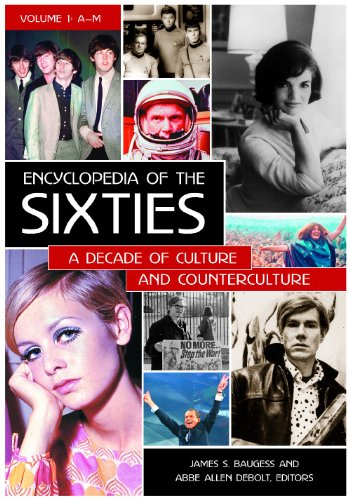 Product Description Comedian Robin Williams said that if you remember the '60s, you weren't there. This encyclopedia documents the people, places, movements, and culture of that memorable decade for those who lived it and those who came after. Encyclopedia of the Sixties: A Decade of Culture and Counterculture surveys the 1960s from January 1960 to December 1969. Nearly 500 entries cover everything from the British television cult classic The Avengers to the Vietnam War and the civil rights movement. The two-volume work also includes biographies of artists, architects, authors, statesmen, military leaders, and cinematic stars, concentrating on what each individual accomplished during the 1960s, with brief postscripts of their lives beyond the period. There was much more to the Sixties than flower power and LSD, and the entries in this encyclopedia were compiled with an eye to providing a balanced view of the decade. Thus, unlike works that emphasize only the radical and revolutionary aspects of the period to the exclusion of everything else, these volumes include the political and cultural Right, taking a more academic than nostalgic approach and helping to fill a gap in the popular understanding of the era. • Nearly 500 A–Z entries on the political, religious, artistic, and popular topics of the decade • A chronology of significant political and social events • 50 photographs and illustrations • Dozens of expert contributors from a variety of fields and academic disciplines • An extensive annotated bibliography From Booklist The editors of this two-volume set present a brief, retrospective history of the 1960s—a defining decade for a generation—as a balanced view, stressing both the traditional culture and the counterculture. The nearly 500 alphabetical articles vary in length from a few paragraphs to several pages. Topics include biographies of musicians, performing artists, and literary giants; civil rights and societal activists; government, military, and political figures; and sport personalities. The Cold War, Vietnam, and other pertinent military events are chronicled. Attention is also given to antiwar movements and the radicals of the era, along with pop culture of the time—marijuana, bra burning, Barbie—and the counterculture movement. Popular and era-defining television programming, film and theater productions, and advancements in science, technology, and the environment, as well as religious attitudes of the times, further enhance the set content. Several memorable speeches of the era and their impact on society are summarized. All individual articles are signed, and a bibliography of sources used in writing the article is given, while see also notations direct the researcher to related topics. A “Guide to Related Topics” groups entries thematically, affording ease in finding related information, while a chronology provides a time line beginning on January 3, 1960, with John F. Kennedy’s announcing his presidential candidacy, and concluding on December 6, 1969, with a note of the violence created at the Altamont rock concert by the Hells Angels. An extensive annotated bibliography concludes volume 2. More than 50 black-and-white photographs are interspersed within the text-heavy set. Informative and user-friendly, this concise overview is good for initial inquiry for those just requiring a brief summary or as a starting point for further examination. Recommended for middle- and high-school libraries as well as public libraries. --Cheryl Ward Review "This set provides a balanced approach to the 1960s that is not always found in other similar resources. The articles are well-written and provide bibliographic sources, emphasizing the work's scholarly approach to the subject. This resource will help fill a gap in the literature and help students understand the era in a more balanced way that reflects more than the legends surrounding it. It will serve well as a supplement to other contemporary U.S. history sources in

Amazing
Great
Average
High
Although this is an Average price, there's a 77% probability this price will be lower. If you can wait, our advice is to Watch it.
Buy on Amazon

Encyclopedia Of The Sixties 2 Volumes A Decade Of, is it available on Amazon?

Yes! But at Pricepulse we inform you when is the lowest price to buy the Encyclopedia Of The Sixties 2 Volumes A Decade Of

Should I buy the Encyclopedia Of The Sixties 2 Volumes A Decade Of now?

Although this is an Average price, there's a 77% probability this price will be lower. If you can wait, our advice is to Watch it.

What is the current price of Encyclopedia Of The Sixties 2 Volumes A Decade Of?

What was the lowest price for the Encyclopedia Of The Sixties 2 Volumes A Decade Of?