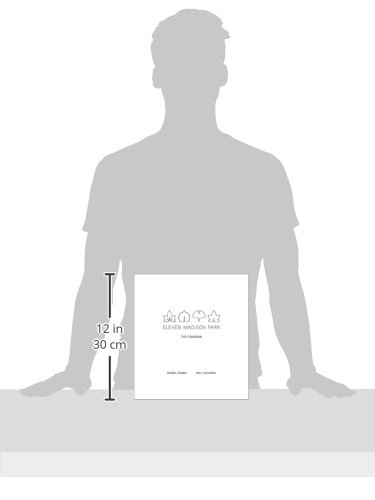 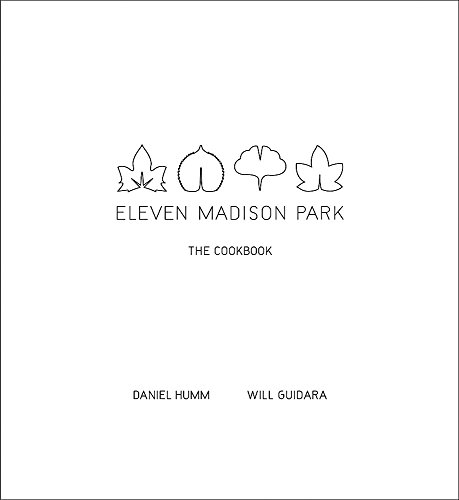 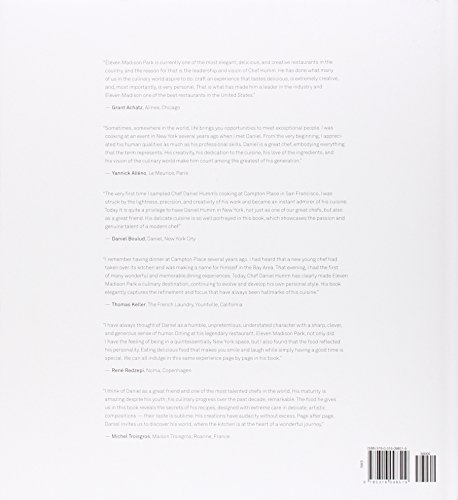 Product Description Eleven Madison Park is one of New York City's most popular fine-dining establishments, where Chef Daniel Humm marries the latest culinary techniques with classical French cuisine. Under the leadership of Executive Chef Daniel Humm and General Manager Will Guidara since 2006, the restaurant has soared to new heights and has become one of the premier dining destinations in the world. Eleven Madison Park: The Cookbook is a sumptuous tribute to the unforgettable experience of dining in the restaurant. The book features more than 125 sophisticated recipes, arranged by season, adapted for the home cook, and accompanied by stunning full-color photographs by Francesco Tonelli. Review "Eleven Madison Park is currently one of the most elegant, delicious, and creative restaurants in the country, and the reason for that is the leadership and vision of Chef Humm. He has done what many of us in the culinary world aspire to do: craft an experience that tastes delicious, that is extremely creative, and most importantly, very personal. That is what has made him a leader in the industry and Eleven Madison one of the best restaurants in the country." ( Grant Achatz, Alinea, Chicago) “Chef Daniel Humm has clearly made Eleven Madison Park a culinary destination, continuing to evolve and develop his own personal style. His book elegantly captures the refinement and focus that have always been a hallmark of his cuisine.” ( Thomas Keller, The French Laundry, Yountville) “It is quite a privilege to have Daniel Humm in New York, not just as one of our great chefs, but also as a great friend. His delicate cuisine is so well portrayed in this book, which showcases the passion and genuine talent of a modern chef.” ( Daniel Boulud, Daniel, New York City) "I have always thought of Daniel as a humble, unpretentious, understated character with a sharp, clever, and generous sense of humor. Dining at his legendary restaurant, Eleven Madison Park, not only did I have the feeling of being in a quintessentially New York space, but I also found that the food reflected his character. Eating delicious food that makes you smile and laugh, while reflecting and simply having a good time, is special. We can all indulge in this same experience page by page in his book." ( Rene Redzepi, Noma, Copenhagen) “[Chef Humm’s] creations have audacity without excess. Page after page, Daniel invites us to discover his world where the kitchen is at the heart of a wonderful journey.” ( Michel Troisgros, Maison Troisgros, Roanne) “Daniel is a great chef, embodying everything that the term represents. His creativity, his dedication to the cuisine, his love of the ingredients, and his vision of the culinary world make him count among the greatest of his generation.” ( Yannick Alléno, Le Meurice, Paris) About the Author Daniel Humm began his chef's training at 14 in his homeland of Switzerland. There, he earned a Michelin Star while in his first Executive chef position at Gasthaus zum Gupf in the Swiss Alps. In 2003 he moved to the United States to work at Campton Place, where he received many awards, including a nomination for Rising Star Chef by the James Beard Foundation. He has been Executive Chef of Eleven Madison Park since 2006. Will Guidara is a graduate of the School of Hotel Administration at Cornell University. He began his dining room training at Spago Beverly Hills and attended culinary school in the North of Spain. Prior to joining Eleven Madison Park, he served as the director of operations of the restaurants at The Museum of Modern Art. He became general manager of Eleven Madison Park in 2006.

Eleven Madison Park The Cookbook, is it available on Amazon?

Yes! But at Pricepulse we inform you when is the lowest price to buy the Eleven Madison Park The Cookbook

Should I buy the Eleven Madison Park The Cookbook now?

What is the current price of Eleven Madison Park The Cookbook?

What was the lowest price for the Eleven Madison Park The Cookbook?