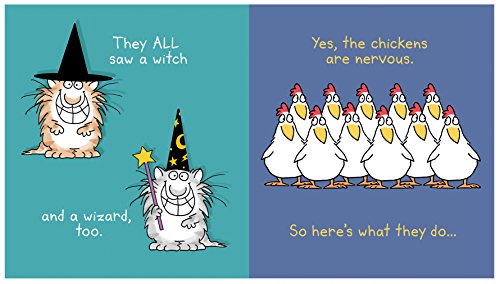 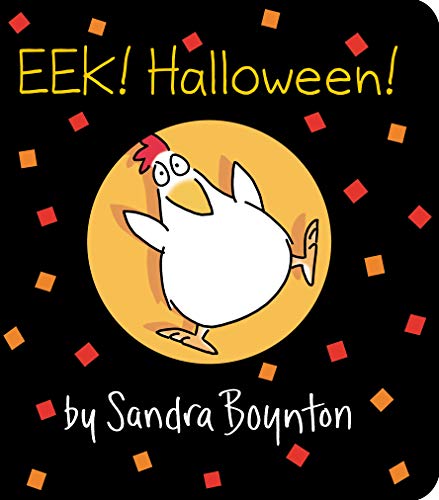 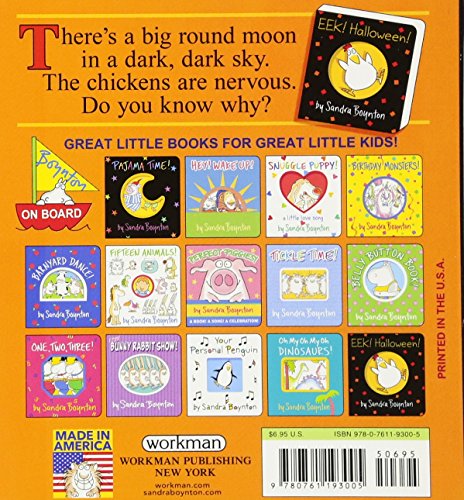 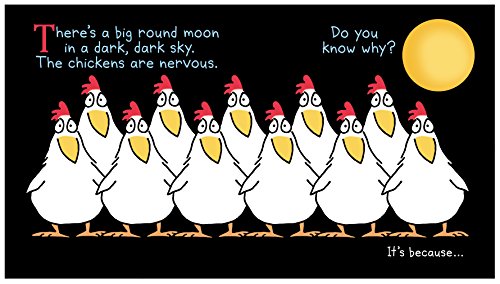 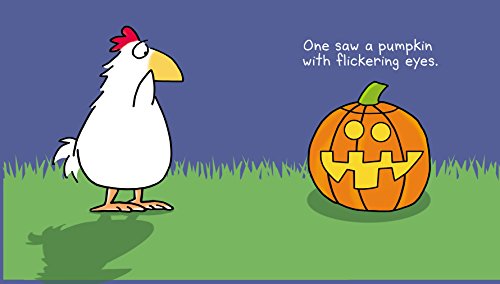 Product Description Boynton celebrates Halloween!There's a big round moon in a dark, dark sky. The chickens are nervous. Do you know why? Strange things are happening. One chicken saw a pumpkin with flickering eyes, another spied a mouse of enormous size. They all saw a wizard and a witch, and a spooky robot. “WHAT’S GOING ON HERE? WHAT DOES IT MEAN? / Relax, silly chickens! It’s HALLOWEEN!”Eek! Halloween! is a holiday favorite that's all treat and no tricks. Oversized lap edition also available—perfect for reading aloud! From School Library Journal PreS-K—The chickens know that something odd is going on. A duck wearing gigantic monster feet? Pumpkins with eerie faces? Their anxiety mounts until a friend pops up to reassure them: "Relax, silly chickens! It's Halloween." This bite-size board book is infused with the sense of whimsy that fans of the author's work have grown to appreciate. She pairs readable text in verse with winsome, thick-lined, round-eyed illustrations to create a delightful introduction to this potentially frightening holiday. Readers will love the cast of enticing creatures—a pig wearing a chicken suit, a large elephant in a mouse costume, a pair of grinning felines in wizard and witch hats, and the soft-bellied chickens (an endearingly expressive bunch, looking around uncertainly and grimacing forlornly)—each placed against a simple backdrop. Boynton maintains a slightly eerie mood but keeps everything just gentle enough to appeal to the intended audience. VERDICT A great addition to board book collections, especially where Halloween titles are needed. Kids anticipating their first Halloween will be easily convinced, along with the initially nervous poultry, that the upcoming holiday is full of spooky fun.—Mahnaz Dar, School Library Journal Review “Kids anticipating their first Halloween will be easily convinced....that the upcoming holiday is full of spooky fun.” —School Library Journal “The pigs are cute, and the coloring and illustrations evoke a warmth...emphasizing all the fun Halloween has to offer. An excellent, rounded effort from a creator who knows how to deliver. (Board book. 1-3)”—Kirkus Reviews“With humorous rhymes and boisterous, expressive drawings, “EEK! Halloween!” is a treat.” —The Washington Post   About the Author Sandra Boynton is a popular American cartoonist, children's author, songwriter, producer, and director. Since 1974, Boynton has written and illustrated over sixty children's books and seven general audience books, including five New York Times bestsellers. More than 70 million of her books have been sold, "mostly to friends and family," she says. She has also written (with Michael Ford) and produced six albums of renegade children's music. Three of her albums have been certified Gold (over 500,000 copies sold), and Philadelphia Chickens, nominated for a Grammy, has gone Platinum (over 1 million copies sold). Boynton has also directed twelve music videos of her songs, including the award-winning "One Shoe Blues" starring B.B. King, "Alligator Stroll" starring Josh Turner, and "Tyrannosaurus Funk" (animation) sung by Samuel L. Jackson. She lives in rural New England, and her studio is in a barn with perhaps the only hippopotamus weathervane in America.

Amazing
Great
Average
High
This is a great price to buy! There's a 67% probability this price will be higher. Our advice is Buy it now.
Buy on Amazon

The Tower of Nero: The Trials of Apollo, Book 5

Eek Halloween Boynton On Board, is it available on Amazon?

Yes! But at Pricepulse we inform you when is the lowest price to buy the Eek Halloween Boynton On Board

Should I buy the Eek Halloween Boynton On Board now?

This is a great price to buy! There's a 67% probability this price will be higher. Our advice is Buy it now.

What is the current price of Eek Halloween Boynton On Board?

What was the lowest price for the Eek Halloween Boynton On Board?