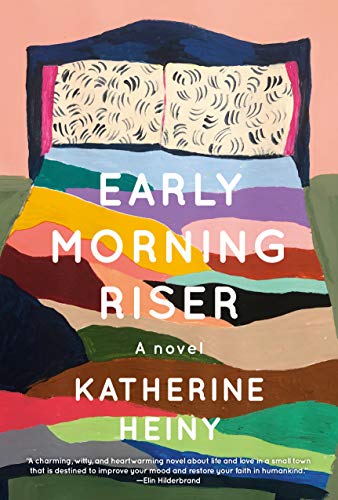 Product Description “The funniest novel of the year.” –The Washington Post   A Good Morning America Buzz Pick A New York Post Best New Novel * An Esquire Best Book of 2021 * An E! News Best Book of April * An Apartment Therapy Best Book of April * A Popsugar Best Book of April * A Newsweek Book to Read * A New York Times Book to Watch For * A Parade Favorite Book of Spring * A Washington Post Best Book to Read in April * A Kirkus Best Book to Read in April * A Daily Skimm Read  A wise, bighearted, boundlessly joyful novel of love, disaster, and unconventional family Jane falls in love with Duncan easily. He is charming, good-natured, and handsome but unfortunately, he has also slept with nearly every woman in Boyne City, Michigan. Jane sees Duncan's old girlfriends everywhere--at restaurants, at the grocery store, even three towns away. While Jane may be able to come to terms with dating the world's most prolific seducer of women, she wishes she did not have to share him quite so widely. His ex-wife, Aggie, a woman with shiny hair and pale milkmaid skin, still has Duncan mow her lawn. His coworker, Jimmy, comes and goes from Duncan's apartment at the most inopportune times. Sometimes Jane wonders if a relationship can even work with three people in it--never mind four. Five if you count Aggie's eccentric husband, Gary. Not to mention all the other residents of Boyne City, who freely share with Jane their opinions of her choices. But any notion Jane had of love and marriage changes with one terrible car crash. Soon Jane's life is permanently intertwined with Duncan's, Aggie's, and Jimmy's, and Jane knows she will never have Duncan to herself. But could it be possible that a deeper kind of happiness is right in front of Jane's eyes? A novel that is alternately bittersweet and laugh-out-loud funny, Katherine Heiny's Early Morning Riser is her most astonishingly wonderful work to date. Review "The funniest novel of the year... You have to pay attention to a book like Heiny’s... Sweetly sardonic... Delightful." —Bethanne Patrick, The Washington Post"The heroine of Katherine Heiny's buoyant new novel,  Early Morning Riser, is a young second grade teacher named Jane who lives in Boyne City, Mich. On the very first page of the novel, Jane locks herself out of her house, calls a locksmith, and winds up spending the night and, eventually, her life with him… Heiny writes in a simple droll style about ordinary people who are often being less than their best selves… [A] literary descendant of Jane Austen, sharing Austen's essentially comic world view." — NPR "Katherine Heiny shows readers how to pay attention to the little things... Jane loves Duncan. But should she? Duncan is a handsome and friendly woodworker who moonlights as a locksmith in small-town Boyne City, Iowa. He’s the guy everybody knows, wink-wink… Fortunately, Duncan is more complicated than that, as is everyone else in Katherine Heiny’s quiet whirlwind of a novel... At its heart, this is a serious story full of lightness." —Connie Schultz, The New York Times Book Review" Early Morning Riser, which unfolds episodically over a period of 17 years, has the makings of a witty romantic comedy that evokes the work of Laurie Colwin... Spot-on descriptions and sharp observations about marriage... Flat-out wonderful—sharp and funny and melancholic in equal measure." —Joanne Kaufman,  The Wall Street Journal"The romance of this wry novel lies in the community Jane creates around her.” — People"A heartwarming novel about the chaos of relationships." — Today " Standard Deviation was one of my favorite books of the last decade, and Early Morning Riser contains the same wit, tenderness and razor sharp observations about modern relationships. I loved it." —JoJo Moyes, author of Me Before You"Early Morning Riser is a joy of a novel. Beautiful, poignant and laugh-out-loud funny. It's the kind of book you'll have no choice but to stay up reading all night, and then you'll be sad

Hour of the Witch: A Novel

Of Women and Salt: A Novel

Hour of the Witch: A Novel

Of Women and Salt: A Novel

Early Morning Riser A Novel, is it available on Amazon?

Yes! But at Pricepulse we inform you when is the lowest price to buy the Early Morning Riser A Novel

Should I buy the Early Morning Riser A Novel now?

What is the current price of Early Morning Riser A Novel?

What was the lowest price for the Early Morning Riser A Novel?