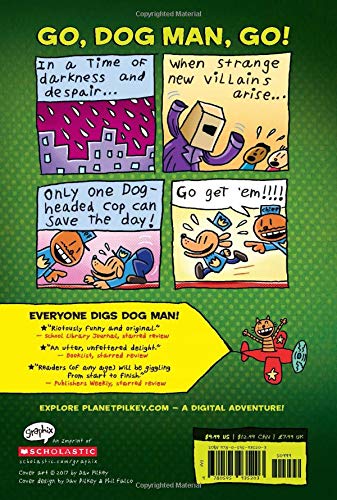 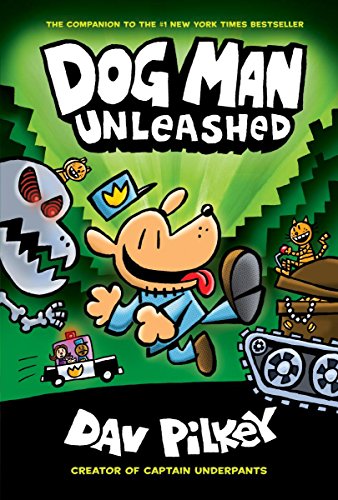 Product Description Petey is up to no good in the second Dog Man book from worldwide bestselling author and artist Dav Pilkey. Dog Man is still learning a few tricks of the trade. Petey the Cat is out of the bag, and his criminal curiosity is taking the city by storm. Something fishy is going on! Can Dog Man unleash justice on this ruffian in time to save the city, or will Petey get away with the purr-fect crime? Dav Pilkey's wildly popular Dog Man series appeals to readers of all ages and explores universally positive themes, including empathy, kindness, persistence, and the importance of being true to one's self. From School Library Journal Gr 1–4—Readers who enjoyed Dog Man will be pleased to see Pilkey deliver the same blend of over-the-top plot turns and hilariously irreverent humor. This time, the title character (the result of medical surgery that fused a canine and a policeman after an accident) is tasked with buying his boss, the police chief, a birthday present. When the pet he purchases turns out to be an evil fish, wacky high jinks ensue. And there's more trouble on the horizon. Angry that a mysterious stranger is framing him for robbery, Dog Man's nemesis, Petey the cat, escapes from prison to clear his name. Meanwhile, the decoy that Petey uses to make his getaway, a flat paper cat, comes to life. Once again, Dog Man must put things right, relying on his keen ability to fight crime while also attempting to stifle some of his canine urges. Pilkey uses the premise that the comic has been penned by George and Harold, two elementary school students, and the artwork and story are delightfully childlike. The illustrations have been rendered with a thick-lined scrawl and simple shapes, and intentional misspellings and errors are sprinkled throughout. While the sentence structure is simple and concise, Pilkey displays a sense of sophistication, including clever puns and wordplay, as well as a clear mastery of sequential art, making this an ideal option for both reluctant and more advanced readers. VERDICT An entertainingly zany addition to graphic novel collections; for series fans and newcomers alike.—Mahnaz Dar, School Library Journal Review Everyone Digs Dog Man! * "Riotously funny and original." -- School Library Journal, starred review * "An utter, unfettered delight." -- Booklist, starred review * "Readers (of any age) will be giggling from start to finish." -- Publishers Weekly, starred review * "Action-oriented cartoons... Laffs aplenty." -- Kirkus Reviews, starred review About the Author When Dav Pilkey was a kid, he was diagnosed with ADHD and dyslexia. Dav was so disruptive in class that his teachers made him sit out in the hallway every day. Luckily, Dav loved to draw and make up stories. He spent his time in the hallway creating his own original comic books—the very first adventures of Dog Man and Captain Underpants.   In college, Dav met a teacher who encouraged him to illustrate and write. He won a national competition in 1986 and the prize was the publication of his first book, WORLD WAR WON. He made many other books before being awarded the 1998 California Young Reader Medal for DOG BREATH, which was published in 1994, and in 1997 he won the Caldecott Honor for THE PAPERBOY.   The Adventures of Super Diaper Baby, published in 2002, was the first complete graphic novel spin-off from the Captain Underpants series and appeared at #6 on the USA Today bestseller list for all books, both adult and children’s, and was also a New York Times bestseller. It was followed by The Adventures of Ook and Gluk: Kung Fu Cavemen from the Future and Super Diaper Baby 2: The Invasion of the Potty Snatchers, both USA Today bestsellers. The unconventional style of these graphic novels is intended to encourage uninhibited creativity in kids.   His stories are semi-autobiographical and explore universal themes that celebrate friendship, tolerance, and the triumph of the good-hearted.   Dav loves to kayak

Current price$6.70
Since 52 days
Average price$7.90
Based on 4 years
Lowest price ever$4.69
2 years ago
Highest price ever$9.99
18 months ago
Amazing
Great
Average
High
This is a great price to buy! There's a 75% probability this price will be higher. Our advise is Buy it now.
Buy on Amazon

Dog Man Unleashed From The Creator Of Captain Unde, is it available on Amazon?

Yes! But at Pricepulse we inform you when is the lowest price to buy the Dog Man Unleashed From The Creator Of Captain Unde

Should I buy the Dog Man Unleashed From The Creator Of Captain Unde now?

This is a great price to buy! There's a 75% probability this price will be higher. Our advise is Buy it now.

What is the current price of Dog Man Unleashed From The Creator Of Captain Unde?

What was the lowest price for the Dog Man Unleashed From The Creator Of Captain Unde?

The lowest historical price was $4.69