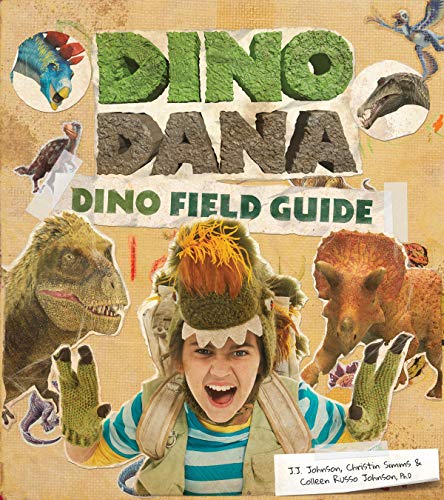 Product Description #1 Bestseller in Children's Fossil Books, Nominated for Four Daytime Emmy® Awards ─ A Dino Dana Field Guide for Kids Fun facts about dinosaurs for kids. Did you know that the brachiosaurus was the tallest dinosaur that we know of today? That the kosmoceratops had fifteen horns and hooks on its head? That the spinosaurus is the only known dinosaur to spend most of its time swimming? Discover this and much more in Dino Dana: Dino Field Guide. Dino Dana's field guide for your child. Fans of the Amazon Prime TV show Dino Dana will be so excited to have a Dino Field Guide of their own, put together by the incredible show's creator and executive producer, J. J. Johnson. Full of colorful illustrations and fascinating science facts, this dinosaur book is sure to amaze any young dino enthusiast. A great science book for kids. This book for children is perfect for any kid who likes history and science. In the Dino Dana field guide, your kids will learn: Which time period each dinosaur lived in How big the dinosaurs were What kinds of things dinosaurs ate and did each day And so much more Kids who like dinosaur books like Dinosaurs, National Geographic Little Kids First Big Book of Dinosaurs, The Big Book of Dinosaurs, and The Dinosaur Book will love Dino Dana: Dino Field Guide. About the Author J.J. Johnson is a founding partner of Sinking Ship Entertainment. He has worked on dozens of TV series, including Dino Dana, Annedroids, and Odd Squad. He has won three Emmy Awards for directing and two for overall production, for his shows Dino Dan and Giver. Colleen Russo Johnson, PhD, is a developmental scientist with expertise in how children engage with and learn from media and technology. She is the Director of Research at Sinking Ship Entertainment, and actively bridges the gap between academia and industry. She is the proud mom of two Dino-obsessed children, Rex and Ripley. Christin Simms is an Emmy-winning executive producer and Emmy-nominated writer who has written and produced many projects with Sinking Ship Entertainment including Annedroids, Dino Dana, Ghostwriter and Endlings. She’s a WGC Screenwriting Award winner and a proud member of their diversity committee.
Amazing
Great
Average
High
This is absolutely the best time to buy. Don’t miss out, there's 92% probability of this price being higher soon. Buy now.
Buy on Amazon

The Big Book of Dinosaurs

The Big Book of Dinosaurs