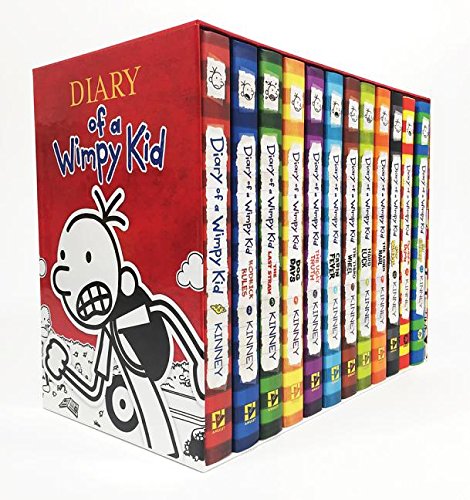 Product Description The first twelve books in the bestselling Diary of a Wimpy Kid series are now available together in a collectible boxed set. Included are Diary of a Wimpy Kid, Rodrick Rules, The Last Straw, Dog Days, The Ugly Truth, Cabin Fever, The Third Wheel, Hard Luck, The Long Haul, Old School, Double Down, and The Getaway, all in a specially designed package. Also Available: The Wimpy Kid 2019 Wall Calendar (ISBN:978-1-4197-3007-8). Wimpy Kid 2020 Wall Calendar (ISBN: 978-1-4197-3638-4) About the Author Jeff Kinney is a #1 New York Times bestselling author and four-time Nickelodeon Kids’ Choice Award winner for Favorite Book. Jeff has been named one of Time magazine’s 100 Most Influential People in the World. He is also the creator of Poptropica, which was named one of Time’s 50 Best Websites. He spent his childhood in the Washington, D.C., area and moved to New England in 1995. Jeff lives with his wife and two sons in Plainville, Massachusetts, where he owns a bookstore, An Unlikely Story.
Amazing
Great
Average
High
This is absolutely the best time to buy. Don’t miss out, there's 99% probability of this price being higher soon. Buy now.
Buy on Amazon

The Happy Man and His Dump Truck (Little Golden Book)

The Trip to the Pumpkin Farm: A Branches Book (Owl Diaries #11)

Richard Scarry's Cars and Trucks and Things That Go

The Pigeon Needs a Bath Book!