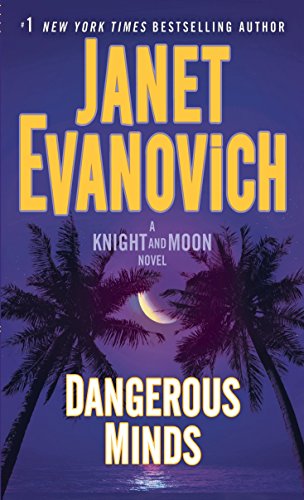 Product Description NEW YORK TIMES BESTSELLER • The irrepressibly charming duo of Emerson Knight and Riley Moon returns in another gripping mystery by #1 New York Times bestselling author Janet Evanovich. Buddhist monk Wayan Bagus lost his island of solitude and wants to get it back. The island was about two hundred miles northeast of Samoa. It had a mountain, beaches, a rain forest, and a volcano. And now it’s gone. Poof! Vanished without a trace. Brilliant and boyishly charming Emerson Knight likes nothing better than solving an unsolvable, improbable mystery. And finding a missing island is better than Christmas morning in the Knight household. When clues lead to a dark and sinister secret that is being guarded by the National Park Service, Emerson will need to assemble a crack team for help. Since a crack team isn’t available, he enlists Riley Moon and his cousin Vernon. Riley Moon has a Harvard business degree and can shoot the eyes out of a grasshopper at fifty feet, but she can’t figure out how to escape the vortex of Emerson Knight’s odd life. Vernon has been Emerson’s loyal and enthusiastic partner in crime since childhood. He now lives in an RV behind Emerson’s house. Together, this ragtag, mismatched trio will embark on a worldwide investigation that will expose a conspiracy one hundred years in the making. About the Author Janet Evanovich is the #1 New York Times bestselling author of the Stephanie Plum series, the Knight and Moon series, the Fox and O’Hare series, the Lizzy and Diesel series, the Alexandra Barnaby novels and Troublemaker graphic novel, and How I Write: Secrets of a Bestselling Author. Excerpt. © Reprinted by permission. All rights reserved. ONE   It was a little after one in the morning when Riley Moon stopped struggling to make sense of the spreadsheet in front of her. She scraped her chair back from her desk, stood, and gave up a sigh. She was in a small room in a large mansion in Washington, D.C., and was surrounded by boxes, laundry hampers, and black garbage bags filled with official papers. She’d been hired to untangle the complicated financial affairs of the Knight family, who for generations had been brilliant at making money and pathetic at keeping records. Riley had been on the job for almost two months, and she’d reached the conclusion that it would be best for everyone if she just set fire to the office and destroyed every available document. Her curly red hair was a rat’s nest from a recently acquired habit of raking her fingers through it. Her brown eyes felt bloodshot. She thought a martini would fix everything, but she didn’t have the energy to make one. She had two degrees from Harvard, a cute nose, a nice family back in Texas, and no social life. The closest she came to having a guy in her life was her boss, Emerson Knight, a man known far and wide as an “odd duck.” True, he was rich, brilliant, and totally hot-looking, but that didn’t alter the fact that he was quackers. Emerson was the latest heir to the Knight fortune, and he had no interest in either making more money or keeping better records. He simply wanted to get his family’s affairs in order so he could keep their many charitable trusts operating while he pursued a life of investigation. Their backgrounds were worlds apart, Riley thought. Her father was the sheriff of a small, dusty county in  north Texas. Her mother was a second grade teacher. Her modest childhood home had unfashionable, comfortable furniture, a small backyard that was fenced for the family dog, a kitchen table that seated seven, and a dining room table that could fit a tight ten but was only used for Thanksgiving dinner. Growing up she had to  compete with her four brothers, so she knew how to shoot, throw  a punch, hit a hardball, and cuss. Riley glanced out her office’s small window and considered her options. She could traipse downstairs, get into her black-and-white Mini Cooper, and drive home to her Georgetown apartment,