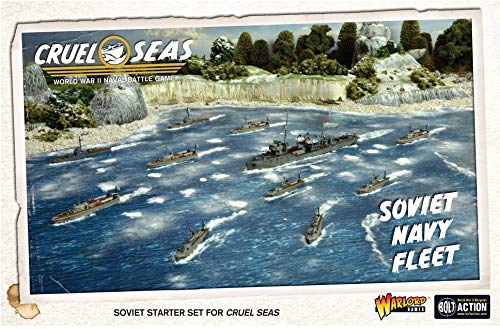 In Cruel Seas, you take on the role of a naval crew manning their fragile coastal craft as they head out day and night to take on both the sea and the enemy. Command your flotilla of small ships as they head out to attack a convoy, drop off Commandoes for a behind-the-lines mission or task them with one of the other myriads of missions this small and versatile craft would perform. Be it the Coastal waters of England or across the Channel to France, on to the Mediterranean waters or on further to the vast Island chains of the Pacific, Cruel Seas will ensure your small ships see plenty of adrenaline-fueled action. The Soviet Fleet was a curious beast, with aging vessels that rarely ventured out en masse with a huge submarine force - significantly superior in number, if not design, to the German U-boats performing a large protion of the naval effort. The Soviet Fleets offensive element was its patrol boats, submarines, minelayers and an immense fleet of motor torpedo boats. These MTBs were of modern design and very fast, reaching up to 57 knots for a short run, an incredible speed for the time. These small boats fought many bitter actions with German, Italian, Romanian, and Finnish coastal forces during WWII.

Current price$80.04
Since 2 hours
Average price$69.41
Based on 20 months
Lowest price ever$58.37
24 days ago
Highest price ever$100.00
2 months ago
Amazing
Great
Average
High
It's not a good time to buy now, there's a 82% probability this price will decrease. Our advise is to Watch it.
Buy on Amazon

Yes! But at Pricepulse we inform you when is the lowest price to buy the Cruel Seas Soviet Navy Fleet 1300 Wwii Naval Milit

It's not a good time to buy now, there's a 82% probability this price will decrease. Our advise is to Watch it.

What was the lowest price for the Cruel Seas Soviet Navy Fleet 1300 Wwii Naval Milit?