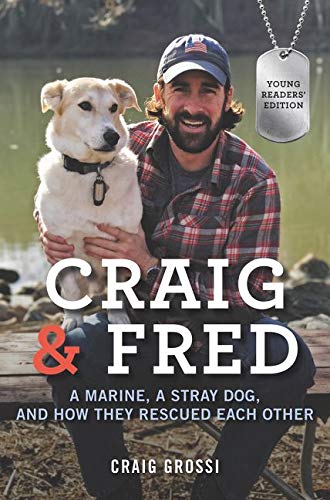 Product Description A heartwarming story of a stray dog and a U.S. Marine who met under the unlikeliest circumstances in Afghanistan—and who changed each other’s lives forever. As part of an elite team of Marines, Craig Grossi was sent on his most dangerous assignment to the Sangin District of Afghanistan. He expected to face harsh conditions and violence from Taliban fighters. What he didn’t expect was to meet a stray dog, with a big goofy head and little legs—a dog all on his own, filthy and covered in bugs, in a bomb-ridden district, but who carried himself with confidence. And even though the Marines have a rule against approaching strays, Craig couldn’t help but offer some food and a pat—and was shocked when the dog wagged his tail. From that moment on, they were inseparable; whether out on missions or back at the base, the dog named Fred went along. When the time came for Craig to leave Afghanistan, he knew that Fred had to leave with him no matter what. And as Craig tried to get acclimated to civilian life, Fred was there for him. This book tells the inspiring story of two friends who ultimately rescued each other, and the stubborn positivity and love that continue to shape their world. Review “More than just a story of a man and his dog, this is a tale of joy eclipsing pain... Positive, encouraging, and inspirational.” -- Kirkus Reviews About the Author Raised in the Virginia suburbs of Washington, DC, Craig Grossi is a Marine Corps veteran, recipient of the Purple Heart and Georgetown University graduate. When not travelling with Fred, he devotes his time to veteran organizations including the USA Warriors Ice Hockey Program and other nonprofits that benefit dogs and veterans. He now lives in Maine with his partner Nora, and their dogs Fred and Ruby.  You can find them online at www.fredtheafghan.com.

Craig Fred Young Readers Edition A Marine A Stray, is it available on Amazon?

Yes! But at Pricepulse we inform you when is the lowest price to buy the Craig Fred Young Readers Edition A Marine A Stray

Should I buy the Craig Fred Young Readers Edition A Marine A Stray now?

What is the current price of Craig Fred Young Readers Edition A Marine A Stray?

What was the lowest price for the Craig Fred Young Readers Edition A Marine A Stray?