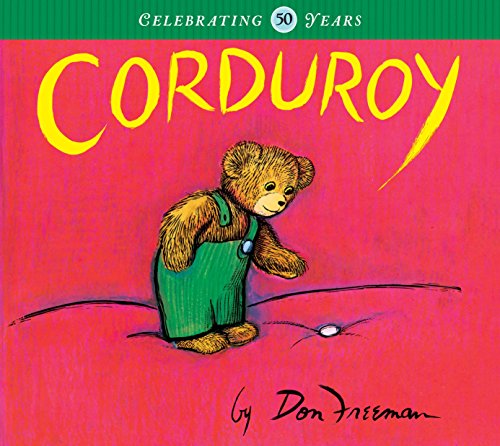 Product Description Corduroy was first introduced to readers in 1968, and in the fifty years since, his adventures have never stopped. Corduroy has been on the department store shelf for a long time. Yet as soon as Lisa sees him, she knows that he’s the bear for her. Her mother, though, thinks he’s a little shopworn—he’s even missing a button! Still, Corduroy knows that with a bit of work he can tidy himself up and be just the bear for Lisa. And where better to start than with a nighttime adventure through the department store, searching for a new button!   Celebrate 50 years of this irresistible childhood classic, a heartwarming story about a little bear and a little girl finding the friend they have always wanted in each other. Amazon.com Review Have you ever dreamed of being locked in a department store at night? The endearing story of Corduroy paints a picture of the adventures that might unfold (for a teddy bear at least) in such a situation. When all the shoppers have gone home for the night, Corduroy climbs down from the shelf to look for his missing button. It's a brave new world! He accidentally gets on an elevator that he thinks must be a mountain and sees the furniture section that he thinks must be a palace. He tries to pull a button off the mattress, but he ends up falling off the bed and knocking over a lamp. The night watchman hears the crash, finds Corduroy, and puts him back on the shelf downstairs. The next morning, he finds that it's his lucky day! A little girl buys him with money she saved in her piggy bank and takes him home to her room. Corduroy decides that this must be home and that Lisa must be his friend. Youngsters will never get tired of this toy-comes-alive tale with a happy ending, so you may also want to seek out Dan Freeman's next creation, . (Ages 3 to 8) Review Corduroy has donated more than three million dollars to a charity helping children with severe illnesses, disabilities, or traumas.   Corduroy hosted Jumpstart’s Read for the Record campaign, which raised more than $1.5 million for early education programs. Two million children and adults read the book on the same day.   Corduroy was one of the first books inducted into the Indies Choice Book Awards Picture Book Hall of Fame.   The New York Public Library named Corduroy one of the 100 Great Children's Books from the Last 100 Years.   The National Education Association named Corduroy one of the Teachers’ Top 100 Books for Children.   School Library Journal named Corduroy one of the Top 100 Picture Books for the 21st Century.   Corduroy’s creator, Don Freeman, received the Kerlan Award in recognition of his singular attainments in the creation of children's literature.   Close to 20 million copies of the Corduroy books have sold in the United States and around the world. About the Author Don Freeman was born in San Diego, California, in 1908. At an early age, he received a trumpet as a gift from his father. He practiced obsessively and eventually joined a California dance band. After graduating from high school, he ventured to New York City to study art under the tutelage of Joan Sloan and Harry Wickey at the Art Students' League. He managed to support himself throughout his schooling by playing his trumpet evenings, in nightclubs and at weddings. Gradually, he eased into making a living sketching impressions of Broadway shows for The New York Times and The Herald Tribune. This shift was helped along, in no small part, by a rather heartbreaking incident: he lost his trumpet. One evening, he was so engrossed in sketching people on the subway, he simply forgot it was sitting on the seat beside him. This new career turned out to be a near-perfect fit for Don, though, as he had always loved the theater. He was introduced to the world of children’s literature when William Saroyan asked him to illustrate several books. Soon after, he began to write and illustrate his own books, a

Goggles: The Bear Who Dreamed of Flying

Oliver West! It's Time to Get Dressed! (Award Winning Book)

Goggles: The Bear Who Dreamed of Flying

Oliver West! It's Time to Get Dressed! (Award Winning Book)

This I Know: Seeing God in the World He Made (based on Jesus Loves Me)

Dear Girl,: A Celebration of Wonderful, Smart, Beautiful You!