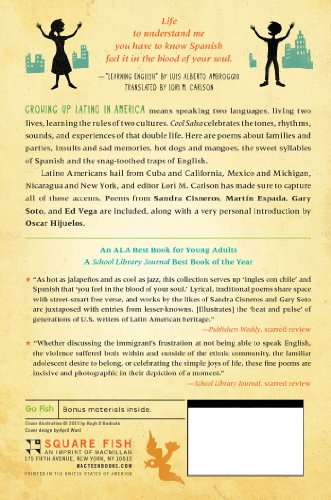 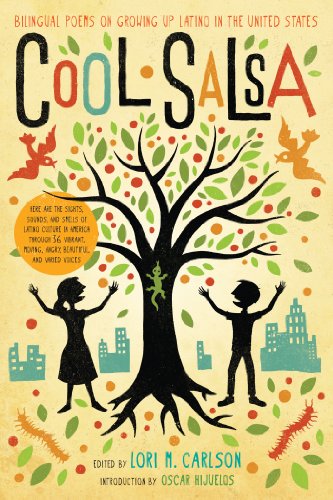 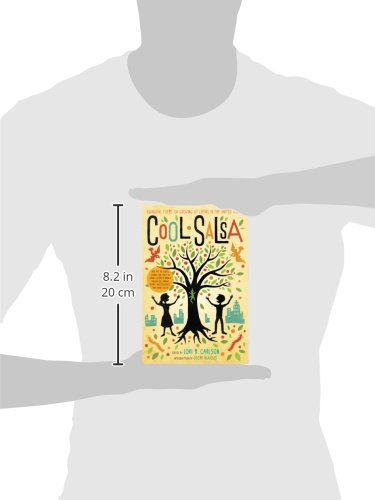 Product Description Growing up Latino in America means speaking two languages, living two lives, learning the rules of two cultures. Cool Salsa celebrates the tones, rhythms, sounds, and experiences of that double life. Here are poems about families and parties, insults and sad memories, hot dogs and mangos, the sweet syllables of Spanish and the snag-toothed traps of English. Here is the glory―and pain―of being Latino American. Latino Americans hail from Cuba and California, Mexico and Michigan, Nicaragua and New York, and editor Lori M. Carlson has made sure to capture all of those accents. With poets such as Sandra Cisneros, Martín Espada, Gary Soto, and Ed Vega, and a very personal introduction by Oscar Hijuelos, this collection encompasses the voices of Latino America. By selecting poems about the experiences of teenagers, Carlson has given a focus to that rich diversity; by presenting the poems both in their original language and in translation, she has made them available to us all. As you move from memories of red wagons to dreams of orange trees to fights with street gangs, you feel Cool Salsa's musical and emotional cross rhythms. Here is a world of exciting poetry for you, y tú también. Review “This spirited, significant collection of poetry for young adults by poets of Latin American heritage is enlivened both by the considerable energy of the poems and by the juxtaposition--and sometimes intermingling--of English and Spanish. ... The collection is eminently successful in celebrating the particular experience of growing up Latino in the United States.” ― The Horn Book, starred review About the Author Lori M. Carlson is an editor and translator who has concentrated on bringing Latino literature to American readers. As co-editor of Where Angels Glide at Dawn, she introduced new Latin American authors to younger readers. She is the founder of the bilingual children's magazine Azul. Most recently she edited American Eyes. Ms. Carlson lives in New York City.

Welcome to the Symphony: A Musical Exploration of the Orchestra Using Beethoven's Symphony No. 5

The Reading Lesson: Teach Your Child to Read in 20 Easy Lessons

Scary Stories to Tell in the Dark: Three Books to Chill Your Bones: All 3 Scary Stories Books with the Original Art!

Cool Salsa Bilingual Poems On Growing Up Latino In, is it available on Amazon?

Yes! But at Pricepulse we inform you when is the lowest price to buy the Cool Salsa Bilingual Poems On Growing Up Latino In

Should I buy the Cool Salsa Bilingual Poems On Growing Up Latino In now?

This is a great price to buy! There's a 75% probability this price will be higher. Our advise is Buy it now.

What is the current price of Cool Salsa Bilingual Poems On Growing Up Latino In?

What was the lowest price for the Cool Salsa Bilingual Poems On Growing Up Latino In?