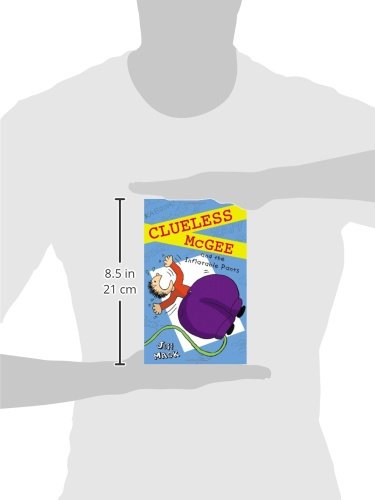 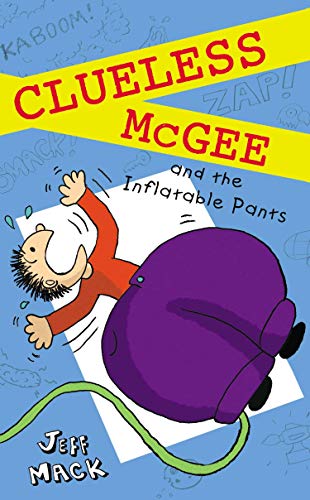 Product Description For fans of Diary of a Wimpy Kid and Timmy Failure!What do you mean they don't give trophies for playing video games? It’s only fair, isn’t it? Clueless McGee has mastered his Ninja Warz video game and he’d like a trophy. It seems like a lot of extra work to have to win the science fair to get one. . . . Yet that trophy is REALLY nice. And Clueless does have an idea for a magnetic pickle that seems like an obvious winner. So okay, he’s in. Until someone steals the trophy—and then he’s on the case! Clueless will have to call on his finest ninja skills —not to mention some luck and a lot of help from people more competent than he is—in order to solve the mystery. . . . Jeff Mack continues to hit every note just right in this hilarious series that young middle-graders will be reading, rereading, and exchanging with their friends until (and even after) the next installment lands on the shelves. With comic-style art throughout, this book is perfect for fans of Diary of a Wimpy Kid, Big Nate, Dork Diaries and for any kid who likes mysteries, likes to laugh, and is a video game master! From School Library Journal Gr 3-5-PJ McGee, would-be ninja and private eye, solves another mystery. Through letters written to his absent father (complete with clever cartoons), PJ tells a strange and humorous tale about a theft. His nemesis is Sara Bellum, who has won every school award and wants her lucky streak to continue by winning the science fair. When the first-place trophy goes missing, PJ is sure Sara has taken it. The inept detective covets the prize, so he sets out with the other two members of the Tae Kwon Do Club (aka the "Ninja Club") to solve the case. Before the trophy is found, there are many bizarre and fantastical skirmishes among the returning cast of characters, including the beleaguered principal, Mr. Prince. The high jinks are over-the-top; the hero has to deal with helium-filled pants, a magnetic pickle, and karate-chopping gloves made from his mother's oven mitts. This is a lighthearted, silly story that will have readers both smiling and rolling their eyes. Though the joke is always on poor PJ, he learns in the end who his real friends and supporters are-and that there are many of them. This title will be well-received by graduates of Dav Pilkey's "Captain Underpants" series (Scholastic) and those who love Jeff Kinney's "Diary of a Wimpy Kid" (Abrams) and Lincoln Peirce's "Big Nate" books (HarperCollins). It will also entice reluctant readers.-Tina Martin, Arlington Heights Memorial Library, ILα(c) Copyright 2013. Library Journals LLC, a wholly owned subsidiary of Media Source, Inc. No redistribution permitted. From Booklist Fifth-grader PJ McGee writes more letters to his absent father, following Clueless McGee (2012). In the opening epistle, PJ reports that “not much has changed here since my last letter,” and that also applies to the book’s rambunctious characters and heavily illustrated first-person style. The latest mystery is a missing science fair trophy, and with plenty of suspects, it takes many mishaps (and some huge pants) for any semblance of serenity to return to PJ’s principal, friends, and mother—and when at last it does, there is the added treat of a mini–comic book featuring a familiar-looking ninja. Mack will once again turn post-Pilkey reluctant boys into readers. Grades 4-6. --Andrew Medlar Review "PJ is charmingly out of touch with reality...His supporting cast adds to the laughs."— Kirkus Reviews "Can PJ crack the case, avoid boogers and impress his absent father? Maybe not, but he’ll inspire giggles as he tries. Mack’s frenetically whack-a-doodle second Clueless McGee title manages to meld mystery and humor in a tale told as much in cartoons as text. Rube Goldberg–ian calamities and grossness are neatly balanced by good intentions and a little friendship lesson. Even a frog-smacker can see this series has legs."-- Kirkus Reviews — Kirkus Reviews "This is a lighthear

Amazing
Great
Average
High
It's not a good time to buy now, there's a 60% probability this price will decrease. Our advice is to Watch it.
Buy on Amazon

Clueless Mcgee And The Inflatable Pants Book 2, is it available on Amazon?

Yes! But at Pricepulse we inform you when is the lowest price to buy the Clueless Mcgee And The Inflatable Pants Book 2

Should I buy the Clueless Mcgee And The Inflatable Pants Book 2 now?

It's not a good time to buy now, there's a 60% probability this price will decrease. Our advice is to Watch it.

What is the current price of Clueless Mcgee And The Inflatable Pants Book 2?

What was the lowest price for the Clueless Mcgee And The Inflatable Pants Book 2?