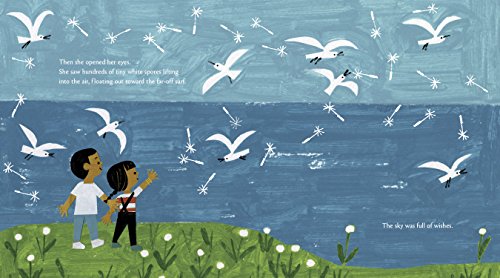 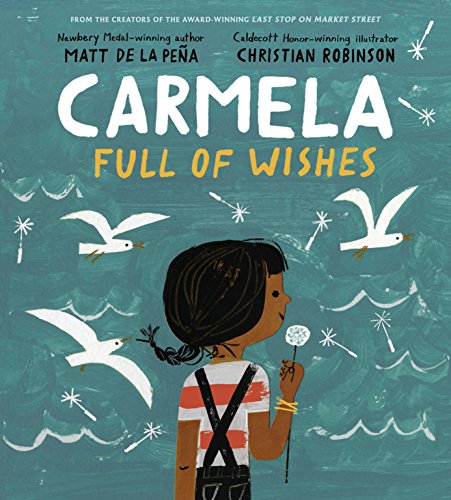 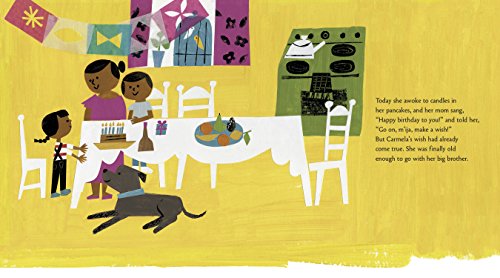 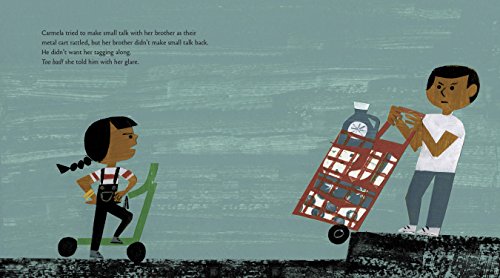 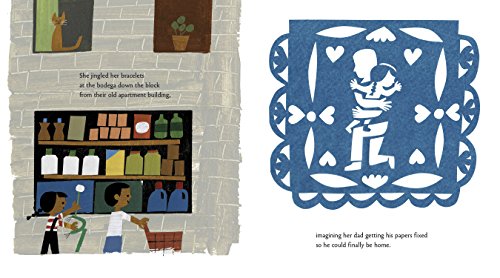 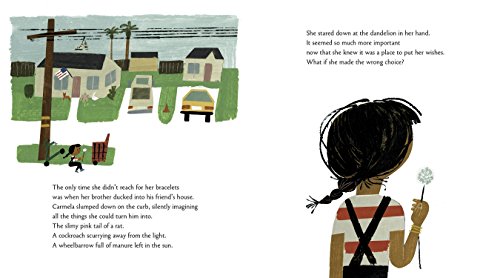 Product Description An Instant New York Times Bestseller!In their first collaboration since the Newbery Medal- and Caldecott Honor-winning Last Stop on Market Street, Matt de la Peña and Christian Robinson deliver a poignant and timely new picture book that's sure to be an instant classic. When Carmela wakes up on her birthday, her wish has already come true--she's finally old enough to join her big brother as he does the family errands. Together, they travel through their neighborhood, past the crowded bus stop, the fenced-off repair shop, and the panadería, until they arrive at the Laundromat, where Carmela finds a lone dandelion growing in the pavement. But before she can blow its white fluff away, her brother tells her she has to make a wish. If only she can think of just the right wish to make . . . With lyrical, stirring text and stunning, evocative artwork, Matt de la Peña and Christian Robinson have crafted a moving ode to family, to dreamers, and to finding hope in the most unexpected places. Review Praise for Carmela Full of Wishes:An Instant New York Times Bestseller An Amazon Most Anticipated Fall Book – Ages 3 to 5 An Amazon Best of the Month Pick October 2018 – Ages 3 to 5An Amazon Editor’s Gift Pick - Ages 3 to 5 A Publishers Weekly Most Anticipated Children's Book - Fall 2018 A Publishers Weekly Best Book of 2018A Kirkus Reviews Best Picture Book of 2018 A Boston Globe Best Children’s Book of 2018 Four Starred Reviews ★ "The award-winning team behind Last Stop on Market Street portrays Carmela’s Spanish-speaking community as a vibrant place of possibility, and Robinson’s acrylic-and-cutout spreads introduce readers to street vendors, workers in the fields, and sweeping views of the sea. Sensitively conceived and exuberantly executed, Carmela’s story shines."— Publishers Weekly, starred review★ “Full of rich details, sharp and restrained writing, and acrylic paintings that look textured enough to rise off the page . . . Another near-perfect slice of life from a duo that has found a way to spotlight underrepresented children without forgetting that they are children first.” —Kirkus Reviews, starred review ★ “Carmela’s journey of wishing, waiting, and wanting resonates on many levels; an important addition to bookshelves everywhere." —School Library Journal, starred review  ★ “[A] beautiful book about the love of siblings and community. . . . A must read for everyone.”— School Library Connection, starred review Praise for Last Stop on Market Street:Winner of the 2016 Newbery Medal A 2016 Caldecott Honor Book A 2016 Coretta Scott King Illustrator Honor Book A New York Times Bestseller “It’s also the warmth of their intergenerational relationship that will make this book so satisfying, for both young readers and the adults sharing it with them.”— The New York Times Book Review ★ “This celebration of cross-generational bonding is a textual and artistic tour de force.”— Kirkus Reviews, starred review “That material poverty need not mean spiritual or imaginative poverty becomes beautifully clear in the quietly moving pages of ‘Last Stop on Market Street,” a picture book by Matt de la Peña filled with Christian Robinson’s vibrant naïf illustrations.”— The Wall Street Journal★ “Like still waters, de la Peña and Robinson’s story runs deep. It finds beauty in unexpected places, explores the difference between what’s fleeting and what lasts, acknowledges inequality, and testifies to the love shared by an African-American boy and his grandmother.”— Publishers Weekly, starred review “Matt de la Peña’s warmhearted story is musical in its cadences…Christian Robinson’s angular, bright illustrations are energetic and vibrant... [A] celebration of the joys of service, the gifts of grandmothers and the tenderness that the city can contain.”— The Washington Post★ “De la Peña and Robinson here are carrying on for Ezra Jack Keats in spirit and visual style. This quietly remarkable book will likely ins

Carmela Full Of Wishes, is it available on Amazon?

Yes! But at Pricepulse we inform you when is the lowest price to buy the Carmela Full Of Wishes

Should I buy the Carmela Full Of Wishes now?

What is the current price of Carmela Full Of Wishes?

What was the lowest price for the Carmela Full Of Wishes?