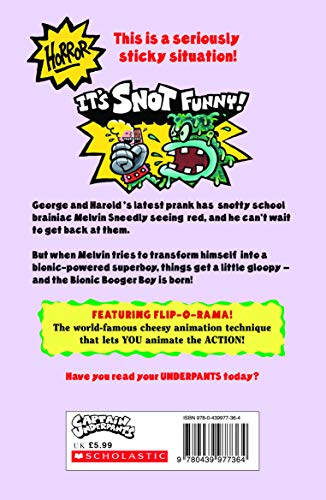 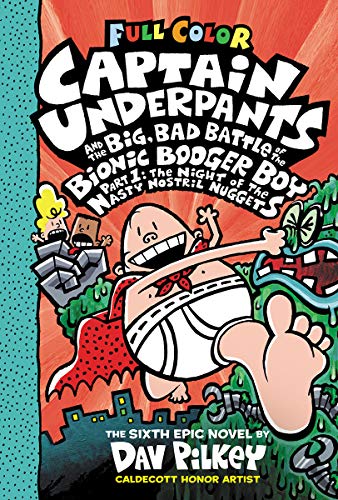 Product Description George and Harold's nemesis Melvin Sneedly goes from snooty to snotty in the sixth book in this #1 New York Times bestselling series by Dav Pilkey, the author and illustrator of Dog Man! George and Harold are up to their old tricks again, and when their latest prank makes a direct hit on school brainiac Melvin, he decides to get even! But in the blink of an eye -- and the sneeze of a nose -- the Bionic Booger Boy is born! Can Captain Underpants clean up this catastrophe, or will the mucous monster make a mess of things? Review The critics are CRAZY about UNDERPANTS! "Irresistible." -- Entertainment Weekly "Call Pilkey... the savior of the 'reluctant reader.'" -- USA Today "So appealing that youngsters won't notice that their vocabulary is stretching." -- School Library Journal "Pilkey's sharp humor shines, and is as much fun for parents as their young readers." -- Parents' Choice Foundation "Combines empowerment and empathy with age-appropriate humor and action." -- Booklist "Celebrates the triumph of the good-hearted." -- The Educational Book and Media Association About the Author When Dav Pilkey was a kid, he was diagnosed with ADHD and dyslexia. Dav was so disruptive in class that his teachers made him sit out in the hallway every day. Luckily, Dav loved to draw and make up stories. He spent his time in the hallway creating his own original comic books—the very first adventures of Dog Man and Captain Underpants. In college, Dav met a teacher who encouraged him to illustrate and write. He won a national competition in 1986 and the prize was the publication of his first book, WORLD WAR WON. He made many other books before being awarded the 1998 California Young Reader Medal for DOG BREATH, which was published in 1994, and in 1997 he won the Caldecott Honor for THE PAPERBOY. THE ADVENTURES OF SUPER DIAPER BABY, published in 2002, was the first complete graphic novel spin-off from the Captain Underpants series and appeared at #6 on the USA Today bestseller list for all books, both adult and children’s, and was also a New York Times bestseller. It was followed by THE ADVENTURES OF OOK AND GLUK: KUNG FU CAVEMEN FROM THE FUTURE and SUPER DIAPER BABY 2: THE INVASION OF THE POTTY SNATCHERS, both USA Today bestsellers. The unconventional style of these graphic novels is intended to encourage uninhibited creativity in kids. His stories are semi-autobiographical and explore universal themes that celebrate friendship, tolerance, and the triumph of the good-hearted. Dav loves to kayak in the Pacific Northwest with his wife.

Current price$6.98
Since 40 days
Average price$7.94
Based on 2 years
Lowest price ever$6.11
7 months ago
Highest price ever$9.99
2 years ago
Amazing
Great
Average
High
This is a great price to buy! There's a 55% probability this price will be higher. Our advise is Buy it now.
Buy on Amazon

The Lost Book of Adventure: from the notebooks of the Unknown Adventurer

How to Catch a Mermaid

We Are Water Protectors

Captain Underpants And The Big Bad Battle Of The B, is it available on Amazon?

Yes! But at Pricepulse we inform you when is the lowest price to buy the Captain Underpants And The Big Bad Battle Of The B

Should I buy the Captain Underpants And The Big Bad Battle Of The B now?

This is a great price to buy! There's a 55% probability this price will be higher. Our advise is Buy it now.

What is the current price of Captain Underpants And The Big Bad Battle Of The B?

What was the lowest price for the Captain Underpants And The Big Bad Battle Of The B?