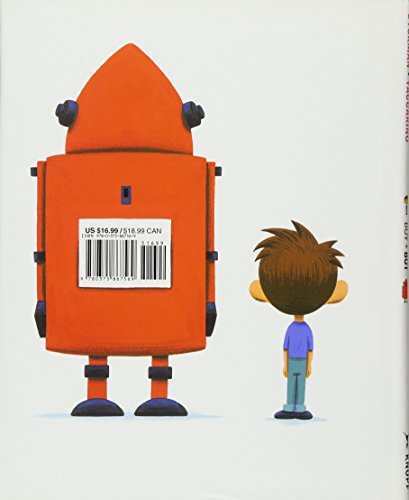 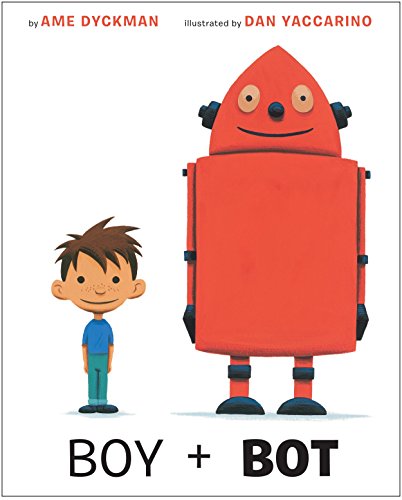 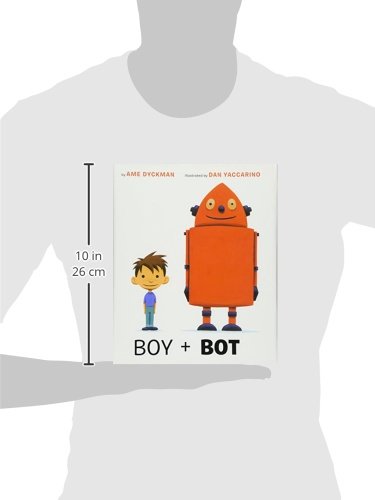 Product Description One day, a boy and a robot meet in the woods. They play. They have fun. But when Bot gets switched off, Boy thinks he's sick. The usual remedies—applesauce, reading a story—don't help, so Boy tucks the sick Bot in, then falls asleep. Bot is worried when he powers on and finds his friend powered off. He takes Boy home with him and tries all his remedies: oil, reading an instruction manual. Nothing revives the malfunctioning Boy! Can the Inventor help fix him? Using the perfect blend of sweetness and humor, this story of an adorable duo will win the hearts of the very youngest readers. From Booklist *Starred Review* Is any love greater than that between a boy and his robot? While picking pinecones, a boy meets a bright-red, rocket-shaped robot and asks, “Want to play? “Affirmative!” the robot responds, and the pair has tons of fun until a rock bumps the robot’s power switch off. Not understanding the bot’s unresponsiveness, the boy wheels him home and begins feeding him applesauce, reading him a story, and crafting a makeshift bed. When the boy’s parents, unaware of a robot behind the door, check on their son, the door bumps the robot’s power switch back on. Not distinguishing the boy’s unresponsiveness as sleep, the robot, in a humorous reversal, fears the boy has malfunctioned and carries him back to his laboratory, where he gives him oil and begins to prepare a new battery—when, just in time, the not-evil-at-all inventor shows up to put things right. The spare text (“Boy! You-are-fixed!”) replicates the steady beats of the simple yet comedic story, while Yaccarino’s expressive, quirky, and humorously geometric gouache illustrations make the boy and robot’s relationship all the more endearing. The final, nearly wordless pages, with snapshots of the friends at play, are priceless. Preschool-Grade 1. --Angela Leeper Review Starred Review, Booklist, April 1, 2012:"“The final, nearly wordless pages, with snapshots of the friends at play, are priceless.” Starred Review, Kirkus Reviews, February 15, 2012:“Dyckman’s debut offers pitch-perfect pacing and gentle humor…. as Boy and Bot would say, it’s ‘affirmative’ that this book will be a hit.” Starred Review, Publishers Weekly, February 6, 2012:“Dyckman’s pared-down prose gives the role-reversal story just enough drama, humor, and robot-inflected dialogue…to keep children entertained for many re-readings.” Review, The New York Times Book Review (online edition), April 11, 2012:“It’s a perfectly adorable, age-appropriate friendship. And it’s simply impossible to imagine a 4-year-old boy not wanting to be friends with this book.” Kids' Indie Next List, Summer 2012 About the Author AME DYCKMAN lives in New Jersey with her husband and daughter. This is her first book. DAN YACCARINO is an internationally acclaimed author-illustrator with more than 30 books to his credit. Dan is also the creator of the animated TV series Oswald. He lives in New York City with his wife and two children.

Current price$16.99
Since 3 months
Average price$11.56
Based on 9 years
Lowest price ever$6.75
3 years ago
Highest price ever$16.99
3 months ago
Amazing
Great
Average
High
It's not a good time to buy now, there's a 73% probability this price will decrease. Our advise is to Watch it.
Buy on Amazon

Mr. Brown Can Moo! Can You?

Boy And Bot, is it available on Amazon?

Yes! But at Pricepulse we inform you when is the lowest price to buy the Boy And Bot

Should I buy the Boy And Bot now?

It's not a good time to buy now, there's a 73% probability this price will decrease. Our advise is to Watch it.

What is the current price of Boy And Bot?

What was the lowest price for the Boy And Bot?