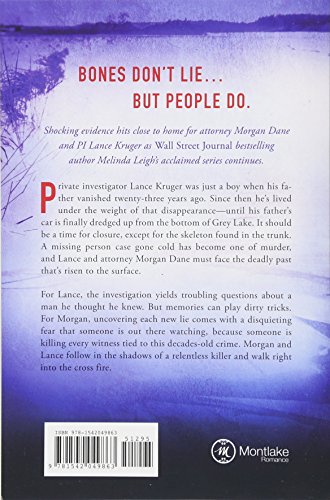 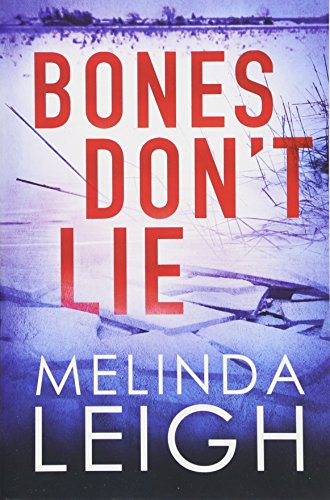 Product Description An Amazon Charts and Wall Street Journal bestseller. Shocking evidence hits close to home for attorney Morgan Dane and PI Lance Kruger as Melinda Leigh’s multimillion-copy bestselling series continues. Private investigator Lance Kruger was just a boy when his father vanished twenty-three years ago. Since then he’s lived under the weight of that disappearance―until his father’s car is finally dredged up from the bottom of Grey Lake. It should be a time for closure, except for the skeleton found in the trunk. A missing person case gone cold has become one of murder, and Lance and attorney Morgan Dane must face the deadly past that’s risen to the surface. For Lance, the investigation yields troubling questions about a man he thought he knew. But memories can play dirty tricks. For Morgan, uncovering each new lie comes with a disquieting fear that someone is out there watching, because someone is killing every witness tied to this decades-old crime. Morgan and Lance follow in the shadows of a relentless killer and walk right into the cross fire. About the Author Wall Street Journal bestselling author Melinda Leigh is a fully recovered banker. A lifelong lover of books, she started writing as a way to pre­serve her sanity when her youngest child entered first grade. During the next few years, she joined Romance Writers of America, learned a few things about writing a novel, and decided the process was way more fun than analyzing financial statements. Melinda’s debut novel, She Can Run, was nominated for Best First Novel by the International Thriller Writers. She’s also garnered Golden Leaf and Silver Falchion awards, along with nominations for a RITA and three Daphne du Maurier Awards. Her other novels include She Can Tell, She Can Scream, She Can Hide, She Can Kill, Midnight Exposure, Midnight Sacrifice, Midnight Betrayal, Midnight Obsession, Hour of Need, Minutes to Kill, Seconds to Live, Say You’re Sorry, and Her Last Goodbye. She holds a second-degree black belt in Kenpo karate; teaches women’s self-defense; and lives in a messy house with her husband, two teenagers, a couple of dogs, and two rescue cats.

Amazing
Great
Average
High
This is a great price to buy! There's a 53% probability this price will be higher. Our advice is Buy it now.
Buy on Amazon

Bones Dont Lie Morgan Dane 3, is it available on Amazon?

Yes! But at Pricepulse we inform you when is the lowest price to buy the Bones Dont Lie Morgan Dane 3

Should I buy the Bones Dont Lie Morgan Dane 3 now?

This is a great price to buy! There's a 53% probability this price will be higher. Our advice is Buy it now.

What is the current price of Bones Dont Lie Morgan Dane 3?

What was the lowest price for the Bones Dont Lie Morgan Dane 3?