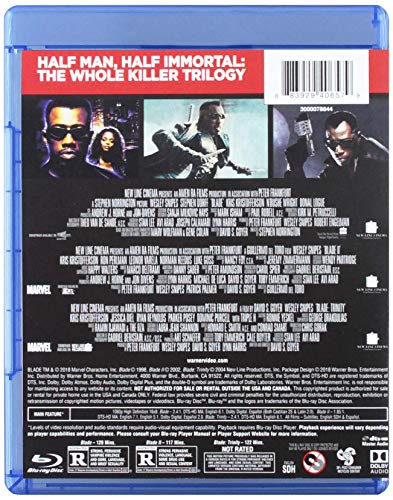 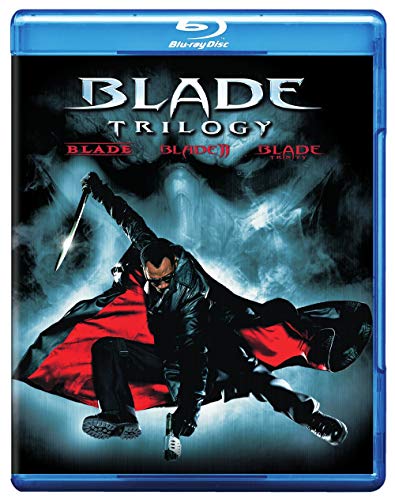 Blade / Blade 2 / Blade: Trinity (BD)(3FE)BLADE - Wesley Snipes stars as the tortured soul Blade, who is half man, half immortal. Blade sharpens his lethal skills under the FBI, he is forced into the daylight, where he joins forces with a clan of human vampire hunters, the Nightstalkers. Together with two deftly trained Nightstalkers, Blade follows a trail of blood to the original vampire: Dracula. guidance of Whistler – his mentor, guardian and fellow hunter of the night. When the bloodthirsty Immortals’ lord, Deacon Frost, declares war on the human race, Blade is humanity’s last hope for survival. BLADE II - Guillermo del Toro directs this high-voltage adventure from screenwriter David S. Goyer. When the world is threatened by a new and deadlier breed of super vampire, Blade and Whistler join forces with an elite team of vampire warriors made up of Blade’s sworn enemies to stop the carnage and destroy the ravenous fiends. BLADE: TRINITY - For years, Blade has fought the vampires under the cover of night. But after falling into the crosshairs of the]]>

Yes! But at Pricepulse we inform you when is the lowest price to buy the Blade Blade 2 Blade Trinity Bd3fe Blu Ray

What is the current price of Blade Blade 2 Blade Trinity Bd3fe Blu Ray?

What was the lowest price for the Blade Blade 2 Blade Trinity Bd3fe Blu Ray?