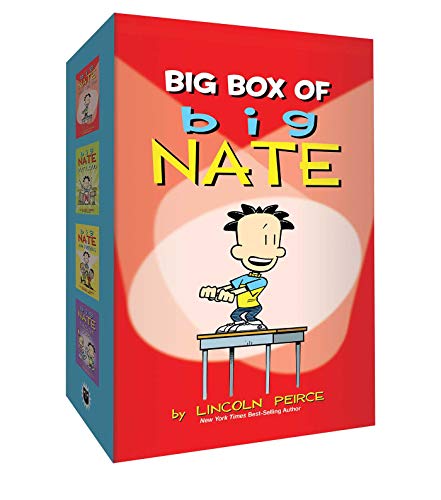 Now an animated series with Paramount+ and Nickelodeon!What's better than a Big Nate book? How about FOUR Big Nate books in one box!Nate Wright—self-described genius, aspiring cartoonist, and the all-time record holder for most detentions in school history—is the star of Lincoln Peirce's widely loved and kid-approved comic strip Big Nate, which has charmed readers of all ages for nearly 30 years. Now you can own the first four collections of the New York Times bestselling series in this box set of classic school hijinks. Go back to the beginning of Nate's daily battles against overzealous teachers, quests to pest his rival Gina, and, of course, many misadventures with pals Teddy and Francis. With an expert prankster like Nate around, there's never a dull day in the halls of P.S. 38.This boxed set is the perfect starter pack for Big Nate fans as well as a treat for long-time reader, all of which can enjoy Peirce's timeless comics for years to come.This collection contains the following Big Nate books:Big Nate: From the Top Big Nate Out Loud Big Nate and FriendsBig Nate Makes the Grade

Clueless in the Kitchen: A Cookbook for Teens (The Clueless series)

The Wonderful Things You Will Be

The Not-So-Friendly Friend: How To Set Boundaries for Healthy Friendships

Yes! But at Pricepulse we inform you when is the lowest price to buy the Big Box Of Big Nate Big Nate Box Set Volume 1 4

What is the current price of Big Box Of Big Nate Big Nate Box Set Volume 1 4?

What was the lowest price for the Big Box Of Big Nate Big Nate Box Set Volume 1 4?