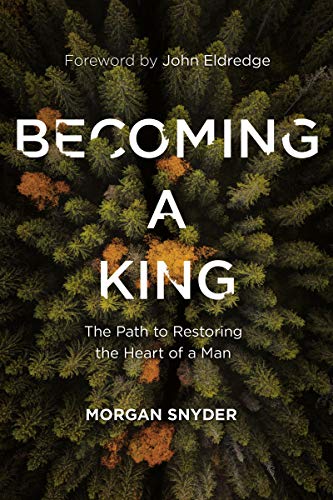 Product Description Becoming a King offers men a map to the narrow road of becoming the kind of man to whom God can entrust his kingdom, while also giving women insight and an honest look into their hearts and lives. It is God’s design, desire, and intention to empower humans and entrust them to participate in the ongoing creativity of the universe. Yet a look at our history and the world around us shows that the story of most men is being entrusted with power and having that power bring harm to themselves and those under their care. What’s gone wrong? When can you entrust a man with power? In Becoming a King, Morgan Snyder shares that when we take a deeper pass at the external problems around us, we begin to see the problems within our souls. Yet Morgan suggests there is hope in an ancient path that leads men to become trustworthy kings. Journey with Morgan as he walks alongside men (and the women who love and encourage them) to rediscover this path of inner transformation. Becoming a King is an invitation into a radical reconstruction of much of what we’ve come to believe about God, ourselves, and the meaning of life. It’s an invitation to a rare and remarkable fellowship of like-hearted kings and an honest conversation about what power and responsibility look like for men in our world today. Traveling the path isn’t cheap. It isn’t easy. It isn’t quick. But it is the heroic journey detailed within the pages of Becoming a King that leads to real life; to men becoming as solid and mighty as oak trees, teeming with strength and courage to bring to a hurting world; and to our sons, husbands, brothers, and friends becoming the kind of kings to whom God can entrust his kingdom. Review 'I'm always reluctant to write blurbs for book, and I didn't want to write an endorsement for Becoming a King--but then I read it. It's not sanctimonious advice written by somebody who's never had his knuckles bloody or his hands dirty or his heart broken; it's the honest account of a man who's been where every man needs to go sooner or later. I don't like to sign my name to things that don't matter. This matters.' --Randall Wallace, Oscar-nominated screenwriter, film producer, director, Braveheart, We Were Soldiers, Heaven Is for Real 'Morgan Snyder has taken the journey that he so compellingly invites other men to embark on in his beautifully written and wisdom-filled book. Courageously honest and true, Becoming a King is a worthy read that you will come back to time and time again and, as Morgan expresses so well, a noble calling to pursue. As a woman reading Becoming a King, I was inspired with how to better come alongside the men in my life, to lovingly encourage them in their lives' ultimate calling.' --Stasi Eldredge, New York Times bestselling author of Captivating 'Morgan Snyder simply asks better questions. His pursuit of the root system of manhood, fatherhood, and royalty brings us within reach of deep truths that could help us outlast the modern brutal storm. This book is for the soul-hungry, sick-of-the-BS reader, which is why I love it. And Morgan picks a much better fight than you'd find in any ring in Vegas or any back-alley bar. His fight is for his own heart.' --Jared Anderson, singer and songwriter of The Great I Am 'Morgan walks us into the basement of our souls, clicks on the light, and begins turning over skeletons and lies. What's at stake? You and me. But fear not. He's been here before. The scars are proof. This is neither theory nor theological wrangling. It's an excavation of the heart. A rescue mission to steal back the truth of us. This book may well shatter the paradigm you have of yourself--only to restore the one your Father has written on your heart. I love everything about this.' --Charles Martin, New York Times bestselling author 'I love this book. It engages the deep matters of the heart. It is a book for men, but be warned. It is as much a book for women to understand what it truly means to grow as a ma

Amazing
Great
Average
High
This is absolutely the best time to buy. Don’t miss out, there's 89% probability of this price being higher soon. Buy now.
Buy on Amazon

Becoming A King The Path To Restoring The Heart Of, is it available on Amazon?

Yes! But at Pricepulse we inform you when is the lowest price to buy the Becoming A King The Path To Restoring The Heart Of

Should I buy the Becoming A King The Path To Restoring The Heart Of now?

What is the current price of Becoming A King The Path To Restoring The Heart Of?

What was the lowest price for the Becoming A King The Path To Restoring The Heart Of?