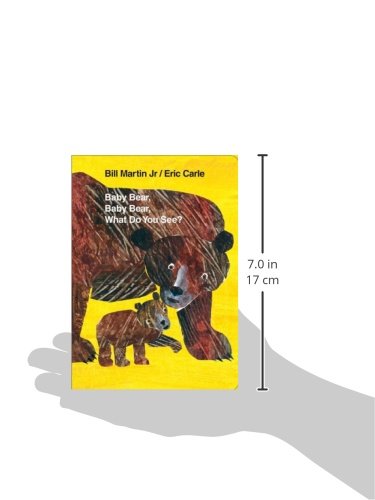 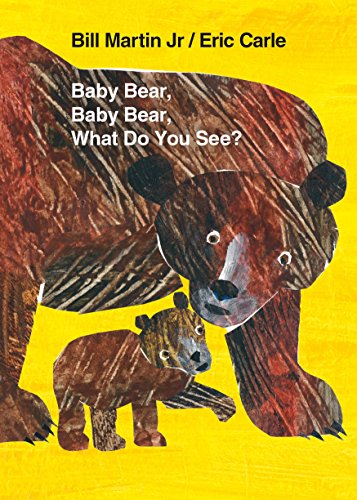 Product Description Baby Bear, Baby Bear, What Do You See? is the final collaboration from this bestselling author-illustrator team.Young readers will enjoy Baby Bear's quest to find Mama, and they'll revel in identifying each of the native North American animals that appear along the way. The central focus on the special bond between mama and baby makes a fitting finale to a beloved series. Now in board-book format for the youngest readers. Review “The elegant balance of art, text, emotion and exposition is a Martin and Carle hallmark; they have crafted a lovely finale to an enduring series.” ―Publishers Weekly (starred review)“A winning formula for keying new and pre-readers into colors, sequences and nature.” ―Kirkus Reviews About the Author Bill Martin, Jr. (1916-2004) was an elementary-school principal, teacher, writer, and poet. His more than 300 books, among them the bestselling classics Brown Bear, Brown Bear, What Do You See?; Polar Bear, Polar Bear, What Do You Hear?; Panda Bear, Panda Bear, What Do You See?; and Chicka Chicka Boom Boom, are a testament to his ability to speak directly to children. Martin held a doctoral degree in early childhood education. Born in Kansas, he worked as an elementary-school principal in Chicago before moving to New York City, where he worked in publishing developing innovative reading programs for schools. After several years, he devoted himself full-time to writing his children’s books. He lived in New York until 1993, when he moved to Texas. He lived in the east Texas woods, near the town of Commerce, until he passed away in 2004. Eric Carle is one of America's leading children's book illustrators. Born in the United States, he spent some time in Germany where he studied at the Academy of Applied Art in Stuttgart. His work has won many awards and has been published in more than a dozen countries around the world. He is author and illustrator of The Very Hungry Caterpillar and illustrator of Bill Martin, Jr.'s Brown Bear, Brown Bear, What Do You See?

Current price$7.15
Since 3 months
Average price$6.59
Based on 9 years
Lowest price ever$2.92
3 years ago
Highest price ever$8.61
19 months ago
Amazing
Great
Average
High
It's not a good time to buy now, there's a 52% probability this price will decrease. Our advise is to Watch it.
Buy on Amazon

Baby Bear Baby Bear What Do You See Board Book Bro, is it available on Amazon?

Yes! But at Pricepulse we inform you when is the lowest price to buy the Baby Bear Baby Bear What Do You See Board Book Bro

Should I buy the Baby Bear Baby Bear What Do You See Board Book Bro now?

It's not a good time to buy now, there's a 52% probability this price will decrease. Our advise is to Watch it.

What is the current price of Baby Bear Baby Bear What Do You See Board Book Bro?

What was the lowest price for the Baby Bear Baby Bear What Do You See Board Book Bro?