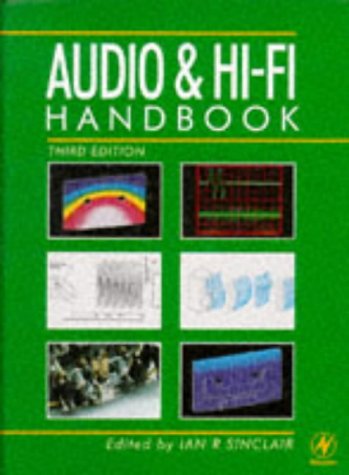 Product Description Written by a team of experts and specialist contributors this comprehensive guide has proved to be an invaluable resource for professional designers and service engineers. Each chapter is written by a leading author, including Don Aldous, John Borwick, Dave Berriman and John Linsley Hood, which provides as wide a perspective as possible on high-quality sound reproduction as well as a wealth of expertise. This third edition has been fully updated to include modern valve amplifier designs, Nicam and satellite radio, and including a new section on servicing. Ian Sinclair has written over 140 books on aspects of electronics and computing and has been a regular contributor to the electronics and computing press. New chapters on valve amplifiers, in-car audio, NICAM and satellite radio, and servicing Contributors include world experts like John Linsley Hood, Nick Beer, Don Aldous, Fred Mornington-West A wide ranging guide for professionals and hobbyists alike Review 'This is a book that will appeal to anyone who is a newcomer to the audio industry..' Lighting & Sound International 'A worthy addition to the bookshelf' Hi-Fi World About the Author Ian Sinclair was born in 1932 in Tayport, Fife, and graduated from the University of St. Andrews in 1956. In that year, he joined the English Electric Valve Co. in Chelmsford, Essex, to work on the design of specialised cathode-ray tubes, and later on small transmitting valves and TV transmitting tubes. In 1966, he became an assistant lecturer at Hornchurch Technical College, and in 1967 joined the staff of Braintree College of F.E. as a lecturer. His first book, "Understanding Electronic Components" was published in 1972, and he has been writing ever since, particularly for the novice in Electronics or Computing. The interest in computing arose after seeing a Tandy TRS80 in San Francisco in 1977, and of his 204 published books, about half have been on computing topics, starting with a guide to Microsoft Basic on the TRS80 in 1979. He left teaching in 1984 to concentrate entirely on writing, and has also gained experience in computer typesetting, particularly for mathematical texts. He has recently visited Seattle to see Microsoft at work, and to remind them that he has been using Microsoft products longer than most Microsoft employees can remember. Ian Sinclair is the author of the following Made Simple books: Lotus 1-2-3- (2.4 DOS version) MS-DOS (up to version 6.22) PagePlus for Windows 3.1 Hard drives He is also the author of many other books published under our Newnes imprint.Visit Ian's website at http://website.lineone.net/~ian_sinclair

Amazing
Great
Average
High
This is absolutely the best time to buy. Don’t miss out, there's 38% probability of this price being higher soon. Buy now.
Buy on Amazon

Audio And Hi Fi Handbook Third Edition, is it available on Amazon?

Yes! But at Pricepulse we inform you when is the lowest price to buy the Audio And Hi Fi Handbook Third Edition

Should I buy the Audio And Hi Fi Handbook Third Edition now?

This is absolutely the best time to buy. Don’t miss out, there's 38% probability of this price being higher soon. Buy now.

What is the current price of Audio And Hi Fi Handbook Third Edition?

What was the lowest price for the Audio And Hi Fi Handbook Third Edition?