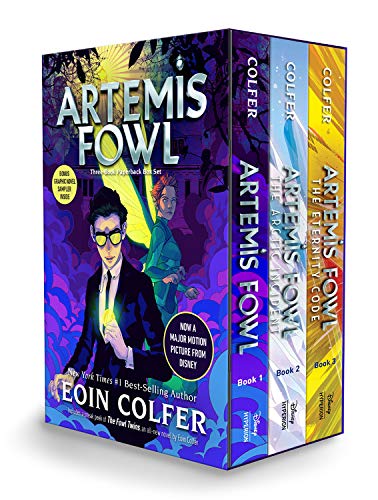 Product Description Eoin Colfer's Artemis Fowl series has enjoyed phenomenal worldwide success and has sold more than nine million copies in the United States alone. For fans eagerly anticipating the release of the Artemis Fowl feature film in 2020, here is a paperback boxed set of the first three books in the series with stunningly redesigned covers, and including a three-chapter sampler of the new Artemis Fowl graphic novel. Review PRAISE FOR ARTEMIS FOWL "Will grab your interest, no matter what your age."― The New York Post PRAISE FOR THE ARCTIC INCIDENT "The world that Colfer creates is as vivid and fantastical as any shire, gotham, or galaxy far, far away in recent memory."― Entertainment Weekly PRAISE FOR THE ETERNITY CODE * "Agile prose, rapid-fire dialogue and wise-acre humor ensure that readers will burn the midnight oil to the finish."― Publishers Weekly (starred review) About the Author Eoin Colfer is the author of the New York Times best-selling Artemis Fowl series, which was adapted into a major motion picture from the Walt Disney Studios. He also wrote the critically acclaimed WARP trilogy, and many other titles for young readers and adults, including Iron Man: The Gauntlet, Airman, Half Moon Investigations, Eoin Colfer's Legend of . . . books, The Wish List, Benny and Omar; and Benny and Babe. In 2014, he was named Ireland's laureate for children's literature. He lives with his wife and two sons in Dublin, Ireland, where he is working on an Artemis Fowl spin-off novel, The Fowl Twins. To learn more, visit www.eoincolfer.com. He is also on Twitter and Instagram @EoinColfer.
Amazing
Great
Average
High
This is a great price to buy! There's a 65% probability this price will be higher. Our advise is Buy it now.
Buy on Amazon

This is a great price to buy! There's a 65% probability this price will be higher. Our advise is Buy it now.

The lowest historical price was $11.84